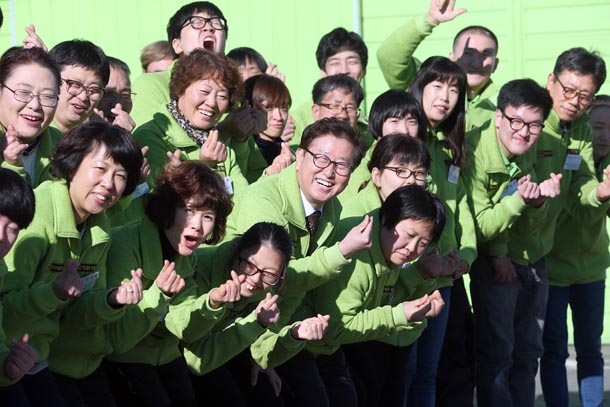 President Kim Man-seok, in the middle, poses with his employees on the company premises in Goyang, Gyeonggi, on Dec. 6. The uniforms are green, symbolizing their recycling system for waste materials. Out of 98 employees at Taegun, 48 are disabled. [CHOI JEONG-DONG]

Taegun Trading Company in Goyang, Gyeonggi, is not a run-of-the mill workplace. Of its 98 employees, 48 of all are disabled, and 42 have severe disabilities.

Taegun manufactures electrical instruments such as fire alarms and light sockets and uses recycled components from other companies. Since most of its work involves simple assembly of components, disabilities don’t really affect performance. The company even implemented a special technology to allow blind employees to work the assembly line.

“Disabilities? Who doesn’t have any disabilities?” asked Kim Man-seok, president of the company, in a Dec. 6 interview with the JoongAng Ilbo. “I was born with a normal body, but in a way, I am disabled too.

“Our handicapped employees have helped us so much and never made any trouble.”

Taegun was named an “inno-biz company,” a portmanteau of innovation and business, by the Small and Medium Business Administration in 2010,

Kim started from scratch. When he first came to Seoul from his hometown in Onyang, North Chungcheong, he slept on the streets because he had nowhere to go. The secret to his success was meeting the right people.

When Kim’s retail outlet in a marketplace near the Cheonggye stream went bust, a worker at one of his contractors helped him get back on his feet. In 1989, he founded a company that would become Taegun Trading, and he hired four disabled people.

“People helped me in life and it was my turn to help others,” he said. Through the next 23 years, he continued to help the disabled by giving them honest work.

The affection the president lavishes on his employees is impressive. Kim built a worker welfare center called the Saemmul Building next to his factory. A cafeteria on the first floor provides free meals to all employees three times a day. The second floor features a gym for employees to work out. The third and fourth floors are free dormitories for those who have long commutes. Employees’ children will start receiving full scholarships for college starting from next year.

“The government supports us with three to four million won ($2,570-$3,426) per disabled employee yearly,” said Kim. “Production obviously goes up. I use some of the profits to support the disabled workers. I tell the non-handicapped personnel that it’s thanks to those disabled workers that we could have gotten this far.”

The company started extending benefits to workers even after they retire when a deaf employee committed suicide in 2014. Kim found out that the employee had been taking care of his severely disabled parents and a sibling.

“I realized that giving a job to the disabled isn’t enough. They might suddenly need a big sum of money and they also have to survive after retirement,” said Kim. The company arranged insurance and pension savings accounts for the employees.

Taegun Trading’s charity goes beyond its own employees. The company donates over 10 million won every month to the Purme Foundation’s Nexon Children’s Rehabilitation Hospital. It is its biggest donor. The company also signed a contract with the National Cancer Center in August and donated 100 million won to be used for low-income cancer patients.

Kim thanks his employees, “I am grateful for the workers and I plan to bequeath the company to the Korea Employment Agency for the Disabled.” Kim asks for little in return, “It would be an honor if, after I die, I am given a funeral as president of the company.”