Violin maestro wants music to be accessible to all

Violin maestro wants music to be accessible to all 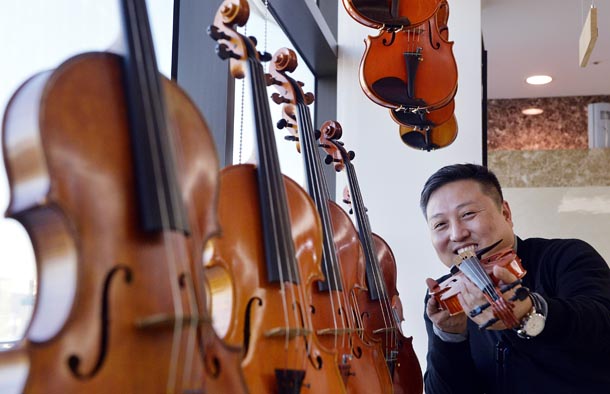 Koo Ja-hong, the president of Vinnoclassic, smiles with the instruments he made himself, swearing to “make a culture of classical music that the disabled and underprivileged people can enjoy altogether.” [KIM SEONG-TAE]

Every month, in a small concert room, Vinnoclassic has been offering free classical concerts to those who could not afford tickets to more prestigious events. Koo Ja-hong, maestro and president of the string instrument making company, has been providing a chance for rookie musicians to perform in front of a live audience and for people to experience classical music. The monthly concert was held for the 55th time this month.

The maestro has divided his workspace into three separate rooms: One for Koo and his four disciples to make the string instruments and other visitors to try making one for themselves, another where the instruments are put on display and the largest room, where the concerts are held.

Koo’s main interest, as of now, is coming up with a way to effectively teach people how to make string instruments such as violins, violas and cellos. Since 2011, more than 3,000 students from 100 schools have visited his workshop, during which the students not only learn about how the instruments are made, but also get a chance to make one themselves and play the strings they have crafted.

Koo himself had once been a viola player. At a young age of five, he endured a severe third-degree burn to his left arm. The damaged muscles and skin ended up growing five centimeters shorter than his right arm, but Koo’s love for music wasn’t hampered. However, no orchestra would let him play.

“The left hand that has to press down the strings was a little uncomfortable,” he said, “and so I faced a lot of challenges.”

In 1996, Koo packed his bags and left for Cremona, a beautiful town in Italy which gave birth to Stradivari, the craftsman of the Stradivarius violins. There, he ran into a string instrument artisan with only four fingers. In the year following his visit to Cremona, Koo entered a violin-making school. His perseverance enabled him to graduate with high scores from the institute, as well as a successful acquisition of the title maestro after a further two-year course at Lodi Scuola D’Arte Bergognone.

Returning to Korea in 2004, Koo founded his company, Vinnoclassic, and started making his own string instruments. The management didn’t go smoothly at first, but with time, Koo started to make himself and his company known not only domestically but internationally. Currently, the company receives production orders from around the world, including Italy, France and Austria.

“Korean people are really good with their hands,” said Koo. “If we get rid of the prejudice that [violins, violas and cellos] are so-called Western instruments, we could end up with master craftsman like Stradivari.”

Koo, whose mind is set on training younger students, plans to open a string instrument production class for the disabled.

“I’m in talks with the local associations for the disabled,” he said, “to help those who cannot freely move the bottom half of their bodies make the instruments to make their own living.”