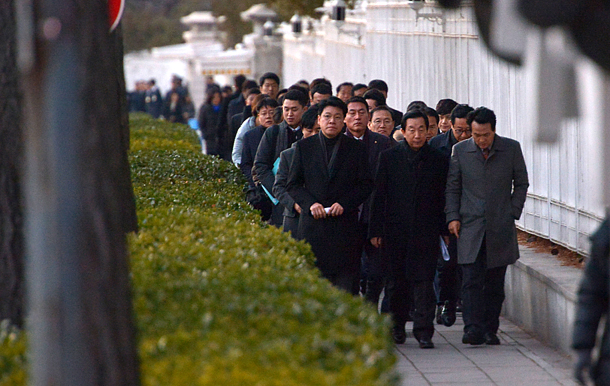 The National Assembly committee investigating the corruption scandal involving President Park Geun-hye and her friend Choi Soon-sil walks out of a building at the Blue House grounds Friday after failing to hold an on-site inspection of the Presidential Security Service building. [NEWSIS]

President Park Geun-hye Friday refused to admit the charges against her in the impeachment motion passed by the National Assembly in a statement to the Constitutional Court.

“It is difficult to admit the charges, including those that say she has violated the Constitution,” said Lee Joong-hwan, one of her legal representatives, to the press after submitting the statement. “And there is no evidence that she made legal offenses.”

The statement reportedly said that Park refused to admit the five alleged constitutional violations and eight criminal offenses outlined by the impeachment motion.

They include allegations of bribery, power abuse and dereliction of duty during the sinking of the Sewol ferry in 2014.

Her legal representatives, including lawyers Lee, Son Bum-kyu, Seo Seong-geon and Chae Myeong-seong, also submitted a statement objecting to the Constitutional Court’s request to an independent counsel and prosecution to share their investigation records into Park, saying it violates Article 32 of the Constitution.

Meanwhile, a parliamentary committee investigating corruption and abuse of power allegations against President Park and her longtime friend Choi Soon-sil attempted an on-site inspection Friday at the security building of the Blue House but was refused.

The committee chaired by the Saenuri Party Rep. Kim Sung-tae arrived at the Blue House around 3:14 p.m. on Friday.

The committee intended to “ask the Presidential Security Service questions on a list of people who came through security and entered the Blue House on April 16, 2014, when the Sewol ferry sank,” according to Rep. Park Beom-kye of the main opposition Minjoo Party of Korea.

There has been much speculation over where Park was and what she did during the first hours of largely failed rescue operation. The press has dubbed it the “seven-hour mystery.” Suspicions were raised that Park might have been having some form of cosmetic procedure arranged by her friend at the center of the abuse of power scandal, Choi.

Park is also reported to have styled her hair for at least 20 minutes after she received a report that 315 lives were at risk in the sinking ferry. The hair stylist and a policeman named Koo Soon-sung, who reportedly knows where Park was during seven hours, were also requested to attend the on-site inspection at the Blue House.

Earlier on Friday, the parliamentary committee visited a cosmetic surgery clinic run by Dr. Kim Young-jae, which is accused of providing secret medical services to Park and Choi.

According to testimonies Kim and other staff at the clinic gave at the National Assembly this week, Choi came to the clinic once a week for the past three years and “paid some 80 million won ($67,460) in cash for propofol injections that she received.” Kim and the staff denied allegations that Choi took drugs to Park.

At a National Assembly hearing Wednesday, Kim admitted that he made secret visits to the Blue House to treat Park, sidestepping the official presidential medical system, but said he never performed any cosmetic surgeries on the president.

Another doctor, Kim Sang-man of the anti-aging clinic Chaum, testified Wednesday that he visited the Blue House and gave Park injections three times before he was formally appointed a presidential doctor in July 2013. Kim said he gave the injections at Park’s residence inside the Blue House without being accompanied by any official medical staff.

While the two doctors admitted that they had treated the president outside the Blue House medical system, they both denied visiting the Blue House on the day of Sewol’s sinking.

Choi has been indicted on charges of influencing state affairs and coercing conglomerates to donate money to foundations and misappropriating the money.