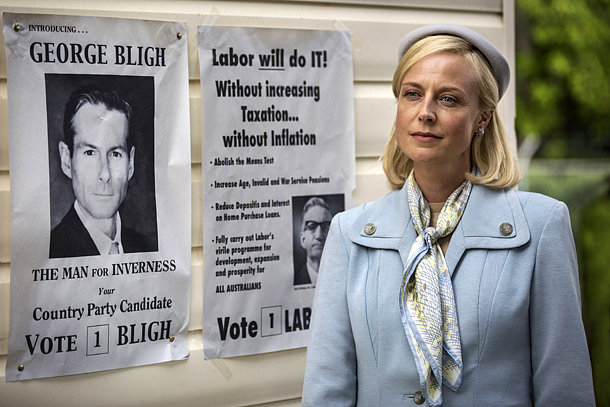 LOS ANGELES - Marta Dusseldorp, a leading TV star in Australia, has decided to give America a try. Or a second try, to be accurate.

Dusseldorp briefly came to the U.S. as a novice actor two decades ago, but couldn’t afford to pursue stage work in New York and found the LA industry challenging for a young outsider.

She became an award-winning stage actress and then, after marrying actor Benjamin Winspear and having two daughters, focused on TV work that was more conducive to family life.

Now at the top of her game, Dusseldorp hopes her next American foray will be different. Among her calling cards: The successful TV dramas “A Place to Call Home,” “Janet King” and “Jack Irish,” all on the air this year in Australia.

“A Place to Call Home” is building to its season-four finale to be released on Christmas Day. The intricate, 1950s-set family saga has been dubbed the Aussie “Downton Abbey,” for those who need a nudge to binge-watch the previous seasons and catch up.

Dusseldorp is another reason - an actress whose intelligent, nuanced performances are matched by her finely etched beauty. (Cheekbones to die for? Check.) She veers skillfully from a steely prosecutor (“Janet King”) to an intrepid journalist (“Jack Irish”) to a nurse with a troubled past.

The last is Sarah Adams, her character in “A Place to Call Home,” who alienated her Catholic mother by marrying a Jewish man, converting and moving with him to Europe. Minimal spoilers: Fate sent her back alone to Australia after World War II and to a job at a hospital in rural New South Wales.

That brings her into the orbit of the wealthy, influential Bligh family - with whom she’d had a fateful encounter on her homeward voyage - and its matriarch, Elizabeth (Noni Hazlehurst), who makes no secret of her hostility to Sarah.

Dusseldorp is especially pleased with season four, which she says reflects the return of series creator Bevan Lee. It’s a “page-turner,” she said, with “revenge, murder, hope, despair and a little bit of laughter as well. It’s a little cheekier.”

As for her second go-round in America, that’s on hold until she fulfills her Australian TV obligations late next year. She’s hopeful but not cocky, although success does run in the family: Her Dutch-born grandfather’s company helped build the Sydney Opera House and formed the roots of a major Australia firm.

“I’m glad when I came to the U.S. before that I only stayed for six months, because I feel I have a lot more to offer now as an actor. I could now actually keep up in the television world,” Dusseldorp said in a phone interview.

“I’d love to work with some of the best of the world, and a lot of them are in America. You want to find those artists and work with them.”