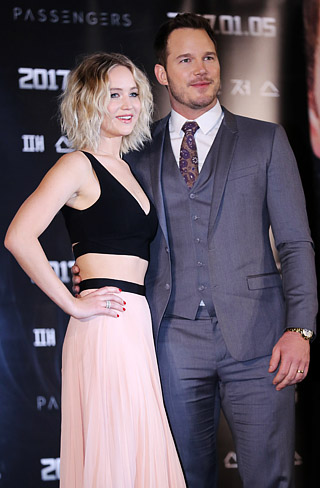 The first time is always an experience, even for Hollywood stars like Jennifer Lawrence and Chris Pratt, who made their maiden visit to Korea on Friday to promote their upcoming science fiction flick “Passengers,” which hits theaters next month.

“This is my first time in Seoul, and I’m so excited to experience and learn more about your culture,” Lawrence said during a press conference held at Times Square in Yeongdeungpo District, western Seoul.

“Thank you for the welcome to Seoul,” Pratt added. “Never had an opportunity to come here and so thrilled to be here. [I’m] proud of the movie, and we can’t wait for you to see it.”

Directed by Morten Tyldum, whose most recent work was “The Imitation Game” (2014), “Passengers” follows mechanical engineer Jim Preston (Pratt) and best-selling writer Aurora Lane (Lawrence) as they embark on a 120-year voyage to a distant colony planet while cryogenically frozen aboard the Starship Avalon. The two encounter a problem when they suddenly wake up 90 years earlier than expected due to a malfunction in their sleep chambers. Soon, they discover a grave defect aboard the spaceship that could endanger the lives of all 5,258 passengers.

The script combines elements of various genres including action, drama, adventure and romance into a single movie. The two stars said it’s what got them on board.

“I believed the script was perfect,” Pratt said. “I really loved the elements of the script that are very daring and on the border line of controversial. I liked how it’s a movie that will challenge people. It was a brave choice for our writers to write this script, and I’m just really proud of it.” 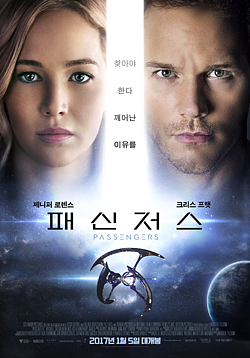 Lawrence agreed. “The idea of a completely original concept was exciting, which is very rare unfortunately. I was excited about many elements of the movie and a lot of things that I’ve never done before. It’s an exciting love story, and I’ve always wanted to work with Chris Pratt. He was already attached with the movie, so I was excited to work with him.”

The pair added that their chemistry off screen helped bolster the two characters’ developing romance.

“When Chris and I first met, we became friends fast,” Lawrence said, adding that the pair shared a similar sense of humor. “I think our friendship helped our characters [naturally bond] in the movie. Our personal chemistry really helped the movie exponentially.”

Pratt responded by describing Lawrence as a “lifelong friend.”

It remains to be seen how much influence the two stars’ first visit to Korea will have on the box office performance of “Passengers” when it hits theaters nationwide on Jan. 5.