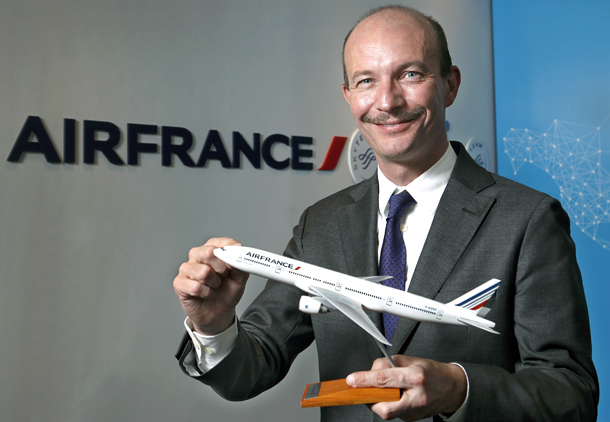 Air France-KLM, one of the earliest pioneers in the Korean aviation market, has gradually expanded its presence by implementing customized services for local travelers since its first direct flight from Seoul to Europe in 1983.

This year, it added customer service on KakaoTalk, a mobile messenger app with more than 40 million users, to cater to tech-savvy Korean customers, and also launched a Korean-style in-flight meal with a local chef on the Paris-to-Seoul route.

Stefan Vanovermeir, newly appointed in July as head of the air carrier’s Korean operations, aims to further the digitalization and localization strategy to capture a bigger market share in what he describes a “dynamic, demanding and quickly changing” country.

Vanovermeir is currently the general manager not only for operations in Korea but for neighboring Japan and New Caledonia. Though on a tight schedule, he drops into Korea once a month after developing a special bond with the country 10 years ago when he worked as a commercial director for Korea. 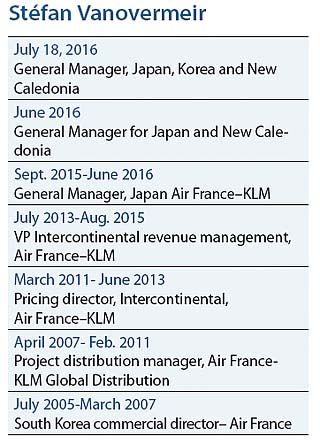 Vanovermeir sat down with the Korea JoongAng Daily at his office in Jung District, central Seoul, to share his plans for the market. This is an edited excerpt from the interview.

Q. You are currently managing three different markets. How is Korea different?

A. There are some similarities between Japan and Korea but when you walk into the market you see they are totally different.

The Korean market is very eager and open to new ideas. Japan is very innovative but when it comes to consumer behavior, it takes a long time to change.

As an example, we have a big event at Dongdaemun Design Plaza, which is called Bonjour Paris, by inviting around 700 couples. They come with their luggage and we do a big lucky draw. Two couples who win will go directly to Paris. This kind of new concept of marketing is something easier to try and test in Korea.

Has Korea changed over the decade?

It has changed a lot. The Korean market is now more demanding. More into innovation, creativity and very quickly changing.

The [air carrier] market has boomed as well. Demand from Korea to Europe has significantly increased. In 2006, the number of visitors [we carried] to Europe was around 1 million passengers, but the figure has doubled to over 2 million in 2016.

Capacity from Korea to Europe also almost tripled. Competition would be a threat for Air France-KLM but at the same time, we are happy to have these challenges to continuously invest in our product and find ways to serve customers better.

How will you respond to changing market conditions in Korea?

First is digital. We will continue to invest more in digital. We are already very well advanced in Korea in this domain. We are interacting with customers via nine social media channels, including KakaoTalk, and creating digital campaigns. This allows close interaction with Korean customers.

Second, we would like to continue to work on customer proximity. I think it’s very important everywhere in the world but more in Korea. Korea is a very demanding market. Customizing the product to Korean customers is key.

For example, when you fly Air France-KLM you can be sure there is one of the staff able to speak Korean, a native speaker. Also for meals, Air France launched Korean-style meals with Chef Mrs. Youn-young Kim of Woonsan restaurant on the Paris-Seoul route for business-class passengers. KLM also serves traditional Korean dishes in all cabins between Seoul and Amsterdam, jointly developed with Samcheonggak, a fine-dining Korean restaurant in Seoul.

This summer, we also hired a Korean manager, a lady, to lead the team, because I believe that to do business in Korea, nobody can be in the best situation than a native Korean.

It’s rare for a European air carrier to offer services through local chat apps like KakaoTalk.

National carriers take a big part of the business share in Korea. How are your relationships with them?

For sure, national carriers, Asiana and Korean Air, they are competitors in the market. But Korean Air is also a big partner for Air France in this market.

Korean Air is one of the four airlines together with Air France and Delta Air Lines to create Sky Team. We have a long-lasting cooperation since 2000. Since 2012, we have extended this partnership with KLM as well.

What we have in this partnership is what we call code-share on the flight between Europe and Seoul. It means Air France customers can buy a ticket from Korean Air to go to Amsterdam and Paris. Same for Korean Air. So this gives more opportunities to customers.

Also, like you have seen in this building, [our office] is hosted by Korean Air. We are happy to be hosted and build a trustful relationship.

How about the increasing presence of low-cost carriers (LLCs) in the country?

LLCs are developing everywhere in the world, especially in developed countries like Korea. LLCs have been developing mainly for domestic flights and regional flights. It’s not a direct overlap with Air France and KLM. No LLCs offer flights to Paris. And I don’t believe any will offer the flight in the near future.

What is changing with LCC development as a longer operator in Korea is that it’s changing the mindset of the customers. We saw that in Europe 20-25 years ago when Easy Jet was rising on the market with very low fares, it totally changed the pricing conception of the customers.

Therefore Air France-KLM faces more and more demand in terms of attractive pricing and various concept of promotions all year around.

For instance, until Dec. 13, KLM is running a one-week Norway promotion and you can buy a round-trip ticket to Oslo at 660,000 won ($506) all inclusive. It’s a very aggressive offer.

Your headquarters has recently proposed to create a new long-haul company within Air France. Is it a kind of low-cost carrier?

If you want to have low costs, you need to be low cost from your DNA. Our ambition is not to be a low-cost carrier, it’s to do a more competitive airline cost-wise on routes Air France is restricted to sell because of cost structure.

So not the low cost, market cost, to go to destinations where today we have difficulty surviving, difficulty to sustain operations with profitability. We have seen that Air France has been obliged to suspend some operations last year like Brasilia and Phnom Penh [Cambodia,] so we do believe that with this boost project we will be able to fly to these kind of destinations with profitability.

Would the project impact Korean operations?

I don’t see the project’s impact for Korea. I do believe in Korea we will continue business as the Air France-KLM traditional brand.

Apart from economic issues, has the recent political crisis involving President Park Geun-hye had an impact on your business?

As a company, it’s not my role to be speaking. However, as a foreigner Korea is a big democracy in Asia. I respect Korean people and representatives.

In terms of business, we don’t see an impact. Korea is not considered in Europe as a dangerous country. When I watch television in France for instance, Korea is sometimes mentioned but it’s very peaceful. It’s not a riot or fighting. [People] are expressing their opinion in a very peaceful way. This is the image given to the world.

The election was planned in 2017 anyway, so there is no main consequence for the company.

There was a shock in Paris last year due to the terror attack. How is the company recovering?

It has been a big shock as well for Air France and KLM. If our destination has difficulty, Air France has difficulty. We have seen some countries in the world with decreasing demand to Paris.

Especially Japan. Japanese people are very sensitive and very risk-averse. The U.S. as well has been a difficult market, even in Europe. In Korea, our market was growing then and it slowed down but we didn’t see a big drop or people refusing to go to Paris.

What was good was in tough times to see that we are together. I see that in Korea, recently about a month ago, a big delegation of KATA [Korean Association of Travel Agents] went to Paris to show their support to show that they want to do something with us, with people working in the tourism industry in France. To further develop the business between Korea and France.

This is very important in tough times, to see that we are together to improve the situation.

I’m pretty optimistic about Korea. I think now the [traveling] trend is almost returning to normal.