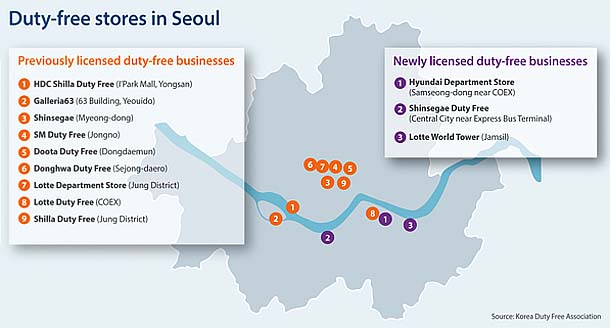 Lotte World Tower’s duty-free shop is back in the game while SK Walkerhill struck out after the government handed out six new duty-free operating licenses on Saturday.

The decision by the Korea Customs Service was made amid controversy surrounding allegations of a pay-to-play scheme between conglomerates and several foundations connected to President Park Geun-hye’s confidante Choi Soon-sil. Three of the six new locations’ operators are conglomerates: Lotte, Hyundai Department Store and Shinsegae.

Unlike last year, when all the selected stores were located north of the Han River, all three major contenders in the latest bids are in Gangnam, raising expectations for economic benefits in the wealthy southern Seoul neighborhoods. All six licenses will last five years.

The Korea Customs Service handed back Lotte its World Tower duty-free business in Jamsil-dong, southern Seoul. Despite massive investment, its license was stripped a year ago after a management control feud broke out between the group’s chairman, Shin Dong-bin, and his older brother Shin Dong-joo. 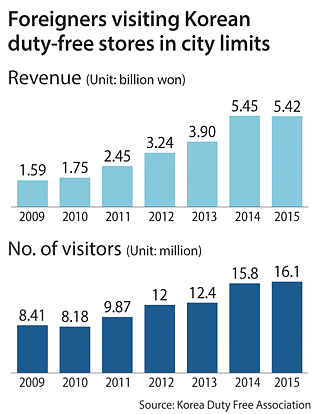 Hyundai Department Store was granted a license to operate a duty-free store in its Samseong-dong location, which is situated next to the popular convention and exhibition center COEX. Shinsegae Department Store will open its shop in its Central City branch next to the Express Bus Terminal in Banpo-dong.

The Korea Customs Service also selected three small and medium-size duty-free operators. Top City Group was granted a license to run a duty-free shop in Sinchon, western Seoul. In Busan, a consortium comprising local companies as well as the Busan Chamber of Commerce and Industry and the Busan Tourism Organization received a license. In the northeastern province of Gangwon, the resort group Alpensia won a bid.

The new licenses bring the number of duty-free businesses located within city limits to 13. Ten of them are run by conglomerates, and they will be competing against each other in the lucrative yet crowded duty-free retail market.

SK Group, which had to shutter its 24-year duty-free business at the Walkerhill Hotel after losing its license last year, failed to win again this year. HDC Shilla Duty Free, a joint venture between Hyundai Development and Hotel Shilla, failed to win a bid for its planned stores near COEX.

The winners welcomed the decision by the Korea Customs Service.

“First, we think it is great that the 1,300 employees of the World Tower who were facing anxiety and uncertainty in the last six months are able to get back to work,” Lotte said in a statement on Saturday. “We will do our best in acting accordingly with the business plans we submitted to the Korea Customs Service. We will not only aggressively invest in Hallyu [Korean pop culture] content development, which will help attract more foreign tourists and create jobs, but also commit to our social responsibility of working together with small and midsize companies that will contribute to both the regional economy and national economy.”

Hyundai Department Store’s chairman, Chung Ji-sun, said, “We will inject new vitalization in the current market by realizing a differentiated duty-free business while raising the quality of the nation’s duty-free business by improving our services through friendly competition that will expand the convenience of tourists.”

After the government stripped Lotte of its operating license in the World Tower last November, there were concerns that duty-free businesses were excessively concentrated north of the Han River. Many major duty-free shops are located in central Seoul, including the country’s top player, the Sogong-dong branch of Lotte Department Store, which earned 2.23 trillion won ($1.88 billion) last year. Shilla Duty Free followed with 1.3 trillion won and Donghwa with 318.8 billion won.

The Korea Customs Service’s decision comes at a sensitive time for the country’s family-run conglomerates. Lotte and SK were among the companies accused of financing projects by Choi Soon-sil, whose influence peddling led to President Park’s impeachment. Lotte Group Chairman Shin Dong-bin and SK Group Chairman Chey Tae-won recently sat through a public hearing where lawmakers grilled them on whether they donated to Choi’s Mi-R and K-Sports foundations in hopes of winning duty-free licenses.

Lotte gave K-Sports 4.5 billion won while SK gave 11.1 billion won to both Mi-R and K-Sports. Chipmaker affiliate SK Hynix invested 6.8 billion won in Mi-R alone. Lotte and SK were reportedly asked to cough up more for Choi’s foundations after Shin and Chey met with President Park in February and March.

After the meeting, Lotte gave K-Sports an additional 7 billion won in donations. The foundation returned the donation in June, one day before prosecutors raided Lotte’s offices.

SK was also reportedly asked to give an additional 8 billion won, but the conglomerate tried to negotiate it down to 3 billion won. Choi is said to have then canceled the deal.

Shin and Chey as well as other conglomerate chiefs denied all pay-to-play allegations.

Some have raised questions about why the customs office decided to rush its decision for licenses, as many expected the announcement to be pushed back to next year after the political scandal is resolved.

The Korea Customs Service played down any suspicions of favoritism in its decision making. It said the evaluation team consisted of nine people from the private sector, including researchers, scholars and officials from civic groups, and two government officials.

“For fair selection of the committee, we created a pool made of roughly 1,000 people including university professors, researchers, experts and civic group officials,” the customs agency said in a statement. “The special evaluation committee members were selected randomly and were made three days prior to the evaluation.”

The customs office also released score cards in the recent evaluation, which weren’t available in the previous two rounds of license decisions. Hyundai Department Store ranked highest with 801.5 points while Lotte came in second with 800.1 points and Shinsegae received 769.60 points.

The scores for SK and HDC Shilla Duty Free, though, were not revealed. The customs agency said it wanted to protect the public image of those that failed to win the bid, arguing that publicly revealing the score could lower corporate value.

In their plans submitted to the customs agency, Lotte promised to invest 2.3 trillion won to make the store a landmark in southern Seoul, while Shinsegae said it would invest 35 billion won and Hyundai Department Store 50 billion won in their new duty-free businesses.