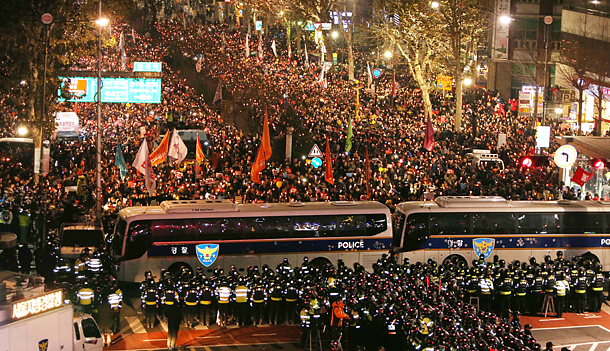 President Park Geun-hye’s adamant refusal last Friday to admit to the charges against her in the impeachment motion passed by the National Assembly fanned public rage over the weekend as 770,000 people across the country took to the streets for the eighth straight Saturday to demand Park immediately step down for the abuse of power scandal involving her close aides and confidante, Choi Soon-sil.

The rally organizers, a coalition of various civic and labor groups, estimated the number of people in the streets of Gwanghwamun Square in central Seoul to be 600,000. Police say peak turnout was 60,000.

The tens of thousands of protesters who convened in Gwanghwamun at 6 p.m. started marching toward the Blue House an hour later, passing the Constitutional Court and finally arriving at the Prime Minister’s Office. Police allowed the protests to be held 100 meters (328 feet) away from each location.

The march toward the Blue House was intended to demand President Park resign, while the pressure on the Constitutional Court came as it began deliberating on the impeachment motion. Protesters accused Prime Minister Hwang Kyo-ahn, currently the acting president and a strong apologist for Park, of overlooking Choi’s growing influence in state affairs and clamored for his resignation, as well.

The surviving families of the April 16, 2014, Sewol ferry accident were clad in life jackets as they pressed Park to acknowledge her failure in saving over 300 lives that day and face responsibility in court.

A coalition of 50 conservative pro-Park groups gathered separately in central Seoul to demand the Constitutional Court strike down the impeachment motion, engaging in political bickering with anti-Park protestors from time to time on Saturday. The organizers claim 1 million people gathered in Seoul, while police places the figure at a much lower 30,000.

Joining the Park supporters was Rep. Kim Jin-tae of the ruling Saenuri Party, whose office in Chuncheon, Gangwon, was egged by members in the public after he commented that the “candles will all go out when the wind blows,” a direct jab at the candlelight vigils that have been sweeping across the nation.

Kim took the front stage during the pro-Park rally on Saturday, saying that the National Assembly’s passing of the impeachment vote was “wrong” and that the Constitutional Court “will dismiss it no matter what.”

Down in Gwangju, Korea’s sixth-largest city and the birthplace of modern democratic movement, 30,000 people gathered around 6 p.m. for their own anti-Park rally, joined by Seoul Mayor Park Won-soon and former Gyeonggi Gov. Sohn Hak-gyu.

At one point, Seoul Mayor Park said the president’s influence-peddling scandal was a “violation of the Gwangju spirit and democracy.”

Before participating in the protest, he visited the grave of Baek Nam-gi, a 69-year-old activist and farmer who died on Sept. 25 after a 317-day coma, which was induced when he was shot by a water canon at an antigovernment rally in November 2015.

The Park administration has refused to take any responsibility in the death.