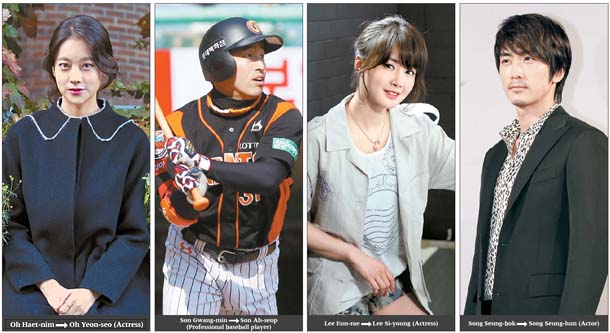 Choi Soon-sil has been making headlines for some time now, but her actual name on her resident registration is Choi Seo-won. Choi was named Choi Pil-nyeo when she was born, changed it to Soon-sil, then changed it to Seo-won in February 2014.

And Choi is not the only member of her family to change her name, either.

Choi’s father, Choi Tae-min, is known to have had seven names in his life. 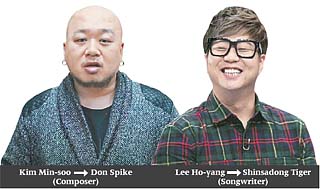 The reasons for these name changes are unclear, but presumably Choi Tae-min’s influence as a self-proclaimed prophet may have been one of them.

Also, those acquainted with Choi have frequently used fake names. Ko Young-tae, for example, who is considered a very close associate of Choi and an executive at Blue K, once went by the name Ko Min-woo. But Choi and her family and friends are not alone in this. A number of young Koreans these days are following suit, as well.

This raises the question of why young Koreans are changing their names. Bae Soo-bin, 27, a freelancer working at a broadcast station, changed her name in January. The counselor who had helped Bae’s friend change her name told Bae her prior name was a “crudely made name” and recommended that she change hers, too.

“I changed my name because it was the New Year holiday back then and I hoped everything would go well in the future,” said Bae. “I’m not sure if it’s because of the name, but I’ve been getting more work and have gotten a boyfriend since then.”

Lim Hee-chul, 30, has been married for two years and changed his name while preparing for his wedding.

“My father-in-law was learning to read fortunes and told me, ‘your name isn’t that good,’ so I made my mind up,” said Lim. “I had been considering changing my name because when I was younger, I visited a fortune teller’s house and was told my name wasn’t good.”

Chung Yoo-ju, an office worker who changed her name five years ago on her mother’s recommendation, said, “my mother went to a philosophy house [a Korean type of fortune teller] and she was told my former name was bad for my health.”

She added, “I don’t know if it’s the effect of changing my name, but my test results reflect the amount of effort I put in, and I’ve had no major illnesses.”

Even though many admit the effect isn’t really life-changing, plenty still enjoy the psychological satisfaction of a name change. Yoon Seong-min, 33, a website manager of a travel agency, got his new name seven years ago.

“My parents went to a naming center for my newborn nephew,” he said, “and they were told someone in the family will be severely ill because of my name and so I changed it. Not much has changed since, but I have become more determined to live eagerly with a new name and a new meaning.”

“I feel reborn after changing my name,” said Kim Sang-heon, who changed his name three years ago on his parent’s advice.

According to the Supreme Court, 43 percent of those who changed their names last year, or 63,785 out of 148,118, were in their 20s and 30s. This percentage has remained above 43 percent since 2011, and may have to do with the fact that most of the life’s big decisions, like getting married or starting one’s career, take place at this time.

Just 10 years ago, the legal process for getting a new name was incredibly complicated. The final authorization of a name change fell upon the Supreme Court, but the process has become much simpler since 2005, when the Court recognized that “the right to one’s name is one’s constitutional right to one’s self and happiness as a matter of self-determination, and thus must be left to one’s subjective judgment.”

Now, all it takes to change one’s name is for the person who wishes to change his or her name, or the person’s legal guardian, to visit the nearest domestic relations court, get approval there and report it to the district office.

There are no requirements or limits for getting a name change.

“Those in their 20s and 30s have increasingly visited me more to get counsel on changing their names in the recent four to five years,” Bae Woo-ri, head of the naming center “Name Love,” said. “I think that’s maybe because these days it’s so hard to get a job or get married, and they want to do everything they can, even if that means getting a different name. There are about 1.5 times as many female visitors as there are male visitors. I presume it’s because women are a little more sensitive than the men when they’re around marrying age.”

But easy though they are, name changes are not without their own set of challenges. In addition to the required paperwork, there is the confusion a new name causes friends and family.

“Everyone around me, including myself, felt awkward after I had my name changed,” said Kim Sang-heon, 25. “Also when I visited the bank a few months ago to open a new account, they told me to bring all sorts of papers and it was so inconvenient.”

“It was very troublesome how I had to put in a request to the websites I had joined before to modify my personal information,” said Yoon Seong-min. “It’s been seven years since I got a new name, and still there are websites where I’m registered under my old name.”

Celebrities and athletes also change their names, often choosing ones that sound more posh or unique. Son Ah-seop, a professional baseball player for the Lotte Giants, is one such example. Son’s lagging performance in 2007 as Son Gwang-min convinced him to change to his current name in 2009, after which he began seeing a visible improvement in his play.

Similarly, Kim Kyun-tae, a pitcher in the Nexen Heroes who joined the team in 2010, used to be Kim Jung-hoon until very recently. Kim decided to go with the change after he consulted his family about his slump.

New names are quite common in the entertainment world. Actress Oh Yeon-seo failed to gain fame with her old name, Oh Haet-nim, for 10 years - until she got herself the name by which she is now famous. Also, the actress Lee Si-young’s birth name was Lee Eun-rae and the actor Song Seung-hun’s birth name was Song Seung-bok.

Even when celebrities don’t actually change their name, the benefit of using another name is clear.

With songwriters, for instance, Lee Ho-yang is known as Shinsadong Tiger and the duo Park Jang-geun and Kim Jung-seung are better known as Duble Sidekick. Also, the novelist Jung Eun-gwol, author of the best-selling books “The Lives of Sungkyunkwan Confucian Scholars” and “Moon Embracing the Sun,” uses a penname.

The late New Ilhan, founder of the Yuhan Company, was born as Il-hyeong. New Ilhan had worked as a newspaper boy in his teen years, when his U.S. boss told him his name was hard to pronounce, and just called him Il-han. Later, New changed his name to Il-han, using the Chinese character Han, which is used to write “Korea” in Chinese. The late former President Kim Dae-jung also changed the Chinese characters of his name, keeping the same pronunciation.