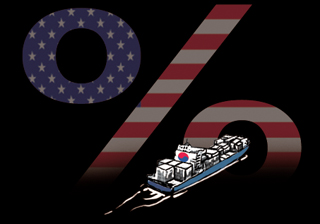 The year-end usually raises hopes that the coming year will be better. Then we become disappointed at another year of the economy underperforming earlier estimates. This year-end does not even allow for hope. The difference in the forecasts is whether the economy would hit this year’s estimated 2.7 percent growth estimate, or be closer to the bottom range of 2 percent.

Those who maintain a growth of more than mid-2 percent argue facility investment and exports will recover next year to compensate for the fizzling out of the booming construction spending that drove domestic demand this year. But that is too optimistic given the political unrest from the president’s impeachment and multiple uncertainties on the external political and economic scene.

Last week’s increase in short-term interest rates by the U.S. Federal Reserve rocked the international markets. Bond yields that have been on an upward swing upon expectations for heavy debt-financed fiscal spending by incoming U.S. President Donald J. Trump gained further momentum from the U.S liftoff in interest rates. The U.S. dollar surged against the euro and Japanese yen as well as the currencies of emerging economies.

A renewed rate increase that was stalled after the first raise in a decade in December 2015 was well anticipated. Still, the markets were unsettled by the Fed’s indication of three additional quarter-point hikes next year. Investors had been burned after they had anticipated up to a 1 percentage point gain in interest rates this year following the first raise in December. Yet they are taking the Fed seriously this time, given the strong recovery of the U.S. economy and Trump’s campaign pledge on heavy infrastructure spending and tax cuts that would fuel the U.S. economy.

Anticipation for a faster-than-expected rise in U.S. benchmark rates have sent the long-term bond yields that move on the average of the short-term yields outpacing the rise in the base rate. The yields in long-term bonds of emerging markets could decouple from the central bank’s policy rate and rise higher regardless of the benchmark level if foreign capital migrates to the United States.

Lending rates for households and companies would jump as a result. The long-term yields would rise higher if economic instability in China adds to the financial market risks. The rate move from the U.S. is enough to shake financial markets across the world.

Some may think that concerns over higher U.S. rates are overrated as long as interest rates in Europe and Japan stay negative. That’s not true. Although the United States makes up just 20 percent of the global output, trade transactions are conducted mostly in the dollar. It is also naïve to expect increased exports from a stronger U.S. economy and a cheaper won could offset dangers from higher interest rates.

The Korean economy is much more vulnerable to interest rate hikes than in the aftermath of the 2008 financial crisis because of the dangerous level of debt-ridden households and corporations. When the U.S. toughens trade barriers under the Trump administration, direct and indirect exports to the U.S. via emerging economies also could be hurt.

Many experts have long warned about the risks from high levels of private-sector debt. They advised stricter regulation on mortgage-backed housing loans and faster restructuring on ailing companies. They demanded caution in premature talk about launching the quantitative easing program. When household and corporate debt levels become excessive, the Bank of Korea’s monetary actions in response to higher U.S. interest rates could become limited. The central bank would find itself in a policy bind as the move following U.S. interest rates to prevent flight in foreign capital could trigger an increase in debt insolvencies and at the same time a rate cut could build up the debt. Korea would be without one major policy ammunition.

But this is all in the past. We would have to posture ourselves for the immediate battle. There is a possibility of another interruption in the U.S. tightening campaign. The pace in recovery could be stalled and instability in emerging markets could spill over to the U.S. equity market. We have saved up some options in our hands. The central bank could intervene to contain the runaway yields through bond repurchases.

Concerns for capital flight and currency jitters would linger. But the government still has leeway in its fiscal capacity to be more aggressive in its spending plans. It, however, needs to be cautious to make sure spending is well designed to help and aid the economy in both the short and long term.

The world economy would stay foggy throughout the first half. The cloud over Korea would be thicker because of political unrest. Stronger leadership and responsibility is demanded of economic policymakers. The first half, in fact, could be an opportunity for them to steer the economy solely based on their expertise and capabilities without political pressure and interference. They must relieve the economy out of immediate danger to set it in the right direction for the incoming administration.


*The author is an economics professor at Sogang University.