Books made to be judged by their covers : Customers seek creative and unique printed materials to read and display

Books made to be judged by their covers : Customers seek creative and unique printed materials to read and display 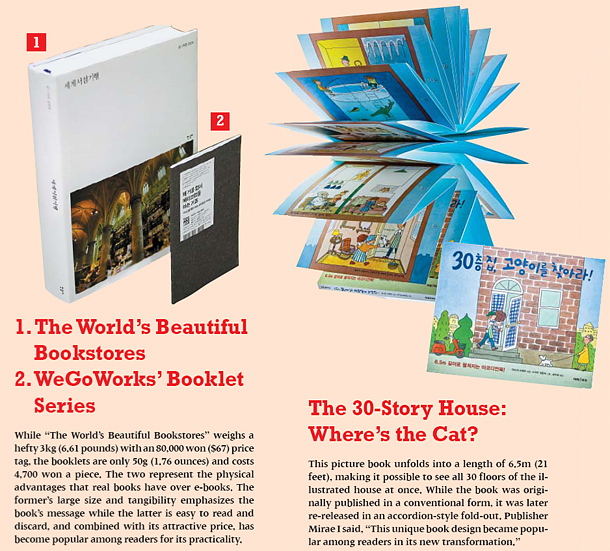 In the midst of the digital era and with the rise of e-books, doubts have grown over the future of paper books. However, a recent survey by the Association of American Publishers in 2015 helped to squelch these fears as surprising results were uncovered. While the sales of e-books dropped by 9.5 percent compared to the previous year, sales of paperbacks actually increased by 16.2 percent. The charm of reading from real paper was translating to successful sales of physical books, despite the convenience of e-books. By taking advantage of this tangibility, publishers are now utilizing creative designs to further spur the success that physical books have seen in recent years.

Scaling up a book so that its contents can’t fit inside a small monitor creates an advantage and appeal for physical paperbacks. The book “The World’s Beautiful Bookstores,” which is 21 cm (8.26 inches) wide, 30 cm tall, and weighs 3 kg (6.61 pounds), is a result of writer Kim Eon-ho’s ambitions, who swore to “show the brilliance of paper books that e-books could never achieve.” Although the book carries a hefty price tag of 80,000 won ($67), all 1000 copies of its initial print were sold out within a month.

The accordion-shaped book “The 30-Story House: Where’s the Cat?” stretches out to be 6.5m (21 feet) long and, along with the 15m pop-up picture book “Trees Dancing,” draws in the reader’s attention with their large sizes. These conceptual art books work to emphasize the texture and other physical properties of paper.

On the opposite end of the spectrum are pocket-sized books which are becoming increasingly popular due to their light weight and portability. Such books are the “booklet” series being published by WeGoWorks, as well as a similar series of titles called “Ssonsal Bookstore” by publisher Mineumsa. The former book series utilizes lightweight groundwood paper in order to maintain its weight of 50 grams (1.76 ounces). 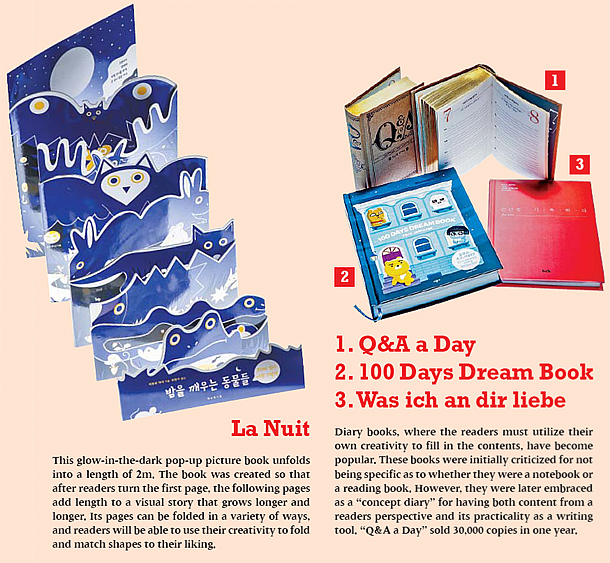 Books for writing and drawing

Coloring books, notebooks, and diaries are multipurpose designs that require readers to fill empty spaces using their own imagination. In “Q&A a Day” published last November, each page contains a question for the writer to jot down their answers. While it may appear as if it was a simple journal, its elegant design and introspective questions such as “Who is my worst enemy?” and “What is my life’s mission?” enabled the book to sell 30,000 copies within a year. Additionally, “Questions to Find Myself” and “Black Diary Book” followed a similar formula. Similarly, the “Autobiography” series published by Neulbooks was another successful take on this concept. By answering the questions in the book, the writer’s autobiography becomes completed. 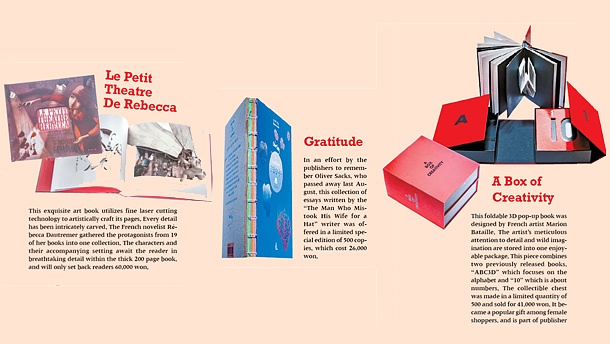 Books released in limited editions, reissues, and other rare collectible releases are a growing trend in the book world. The reissued poetry collection “Sky and Wind and Star and Poem” by Yun Dong-ju was the first to start the trend domestically, as the re-released book was able to sell nearly 20,000 copies since it was published in February. Collectible books meant only for display are also being traded and gifted in a new trend among the book-loving community.

These books are now being published mainly in the form of art books meant for adults. A series of such books called “The Collection” by Borim Press is a successful example. Kwon Jong-taek, a Borim Press representative, said, “Each page is finely laser-cut and silk screen printed, becoming a work of art for readers to display.”