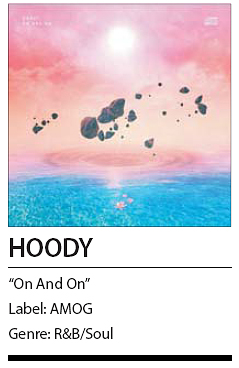 
Independent record label AMOG’s producers Jay Park, GRAY and ELO have teamed up to create a top-notch debut EP for the label’s first female artist Hoody. All nine tracks are about love, but the producers managed to create uniquely attractive songs. Hoody wrote all of the song’s lyrics on the album, an impressive feat for an artist’s debut.

About half the songs feature renowned artists including Jay Park, Jinbo, ELO and Dok2.

The title track “Your Eyes” produced by GRAY, features Jay Park and their husky voices blend well together.

Formerly a member of an all-female underground hip-hop crew AMRT consisting of famous Korean hip-hop artists like KittiB, Nieah and SERI, fans may expect to hear Hoody rap, but this EP is all about R&B and soul.

Listening to the EP in full may leave listeners wanting more and looking for something more upbeat. A mix of rhythms could have been better for the average listener, but R&B fans will relish in the sound.