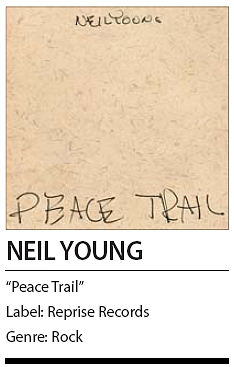 
Prolific rocker Neil Young is at his curmudgeonly best on “Peace Trail,” bemoaning his place in the current generation while standing up for his commitment to fighting for the underdog.

In that way, “Peace Trail” is representative of late-career Young. It’s quirky, soulful, poignant and powerful - if not a little unpolished.

Young stands up for the Standing Rock Sioux and other protesters who have been fighting an oil pipeline in North Dakota on “Indian Givers.” He ends the album with “My New Robot,” a track that would easily fit on his 1982 release “Trans.”

On “My Pledge” Young sings, “I’m lost in this new generation, left me behind it seems.” And, in a great use of irony, he sings using Auto-Tune.

Young has become quite a fan of Auto-Tune lately. He used it sparingly on his hybrid live album “Earth,” released just six months ago, and it comes up again on “Peace Trail.”

On “Can’t Stop Workin’” Young sings that he likes to work even though “it’s bad for the body but it’s good for the soul.” Let’s hope Young, who turned 71 last month, has much more work to do in the years ahead. AP