New musical is as different as Jekyll from Hyde : Producer Shin Chun-soo says this version differs in more ways than language

New musical is as different as Jekyll from Hyde : Producer Shin Chun-soo says this version differs in more ways than language 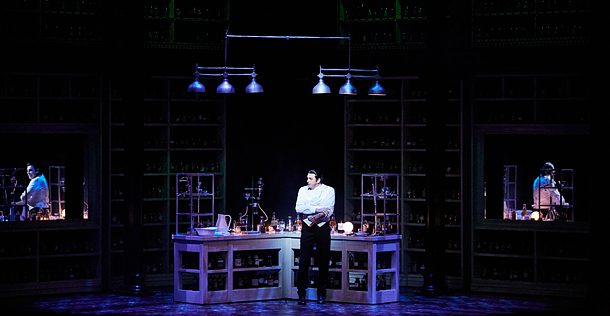 A Korean musical production company created an English language musical, “Jekyll & Hyde,” to tour the world with a cast of Broadway actors. Bradley Dean, above, plays the role of Jekyll and Hyde during a premiere in Daegu. [OD COMPANY]

DAEGU - Korean musical-aficionados are all well familiar with the popular musical “Jekyll & Hyde.” The Korean production of this horror-drama musical premiered in 2004, and has sold more than 1.14 million tickets since.

Over the years, fans have been mesmerized by Jo Seung-woo’s one-man show as Dr. Jekyll and Mr. Hyde. For Korean audiences, Jo truly is Jekyll and Hyde.

But OD Company, a musical production company that created the Korean version of this licensed musical and won huge success, decided to challenge the world musical industry by creating a new production of this long-loved musical in English and casting actors from Broadway.

On Dec. 1, in Deagu’s largest 2,000-seat Keimyung Art Center, the new English version of the musical “Jekyll & Hyde” by OD Company kicked off a month-long run, prior to its plan to come to Seoul’s Blue Square in March. 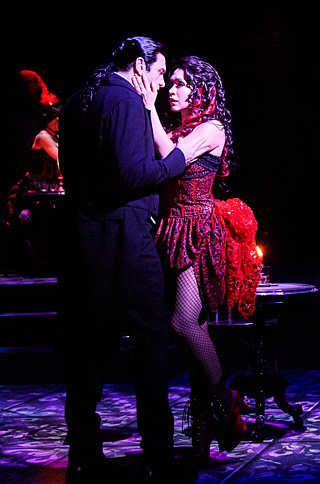 “Most musicals in the U.S. begin from the so-called ‘out of town’ shows, off Broadway, before making their way to Broadway,” said Shin Chun-soo, president and producer of the OD Company. “By staging shows here first, we are going to make developments or improvements where they are needed, and then take it up to Seoul, and then to the world, in English speaking countries.”

Shin says he’s not free from Korean audiences and critics making comparisons with his Korean production, but insisted on calling the show not “the English version” of his “Jekyll & Hyde” but a whole new production that suits the palate of English-speaking audiences.

“The fans of the Korean production of ‘Jekyll and Hyde’ are bound to compare,” said Shin. “I do get questioned a lot as to what the main difference is between the two shows, other than the language, but I want Korean audiences to approach it as a new production that’s aiming for world tours, not as the same ‘Jekyll & Hyde’ in English.”

When this reporter watched the show in Daegu on Dec. 7, Shin’s concerns seemed unwarranted, as Jo’s Jekyll and Hyde never came to mind. Bradley Dean, who played Jekyll and Hyde, gave his all, staging breathtaking scenes, changing back and forth from Jekyll and Hyde.

“We’ve tried really hard to cast perfect Broadway actors for the leading roles,” said Shin. “It’s sad to admit that Korea’s musical industry depends heavily on star casts like a popular singer or an actor. That’s the reality. If unfamiliar faces appear as leading roles, it’s difficult for a musical to become a hit, despite being a well-made musical.”

Shin said he wanted to challenge this phenomenon with his world tour production of “Jekyll & Hyde.”

“These actors from Broadway are top-notch, but in Korea, they are unfamiliar faces,” he said. “So I’m taking this as an opportunity to see how Korean audiences judge my work truly based on its quality.”

For the role of Lucy, the prostitute working at the Red Rat, Diana Degarmo has been cast. Degarmo, familiar to Koreans as the runner-up on American Idol Season 3 in 2004, performed in various musicals on Broadway, such as “Hairspray” and “Toxic Avenger.” Lindsey Bliven has been cast to play the role of Emma. Meanwhile, Dean has performed in various musicals on Broadway, including “A Little Night Music,” “Spamalot,” and “Man of La Mancha,” among others.

“This is the role I’ve wanted to play my whole career,” said Dean. “I actually never even had the opportunity to audition for the role. But since it’s something I always wanted to do, I was always ready. When I got the chance to go into the audition room for this production and sing the music, I kind of felt like the horse that was allowed to run as the gate was open.”

Recalling Dean’s audition, Shin said, “he was perfect, and everyone in the room felt the same. Korean audiences will feel it, too.”

It’s not Shins first attempt to aim for Broadway.

He was a lead producer of a jukebox musical, “Holler If Ya Hear Me,” and a producer for “The Story of My Life.” But they didn’t lead to Broadway success.

“I believe the musical market in Korea has reached an apex and felt like it was time to globalize content created in Korea. It may fail, but I think it’s a must to continue trying for the global stages,” he added.

Since it’s a “new production,” a few developments have been made in the world tour version.

The stage design, lighting and costume designs have been upgraded. An exquisite attention to detail was also noticeable, for example, with 1,800 glass bottles in the laboratory being lit up in different colors.

“I’ve seen various productions of ‘Jekyll & Hyde’ from Broadway companies on the internet and I personally feel that ours is a slightly more modern take on the show,” said Degarmo. “We respect the time period we are set in, which is 1885, but we know what the current audiences want to see.”

The storyline, according to Shin, also has been modified to “appeal more to a global audience than Koreans.”

For example, Lucy’s big number, “Bring On the Men,” was modified to sound more beautiful, whereas in the Korean version, her vulgarity and sexiness are dramatically lower, according to Shin.

But for this world tour production, Shin said he tried to expose Lucy’s characters as she is. 