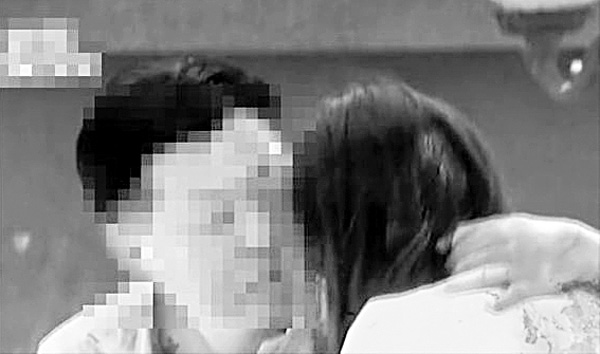 A screen capture from a Chilean TV show, “En Su Propia Trampa,” or “In his own trap,” which shows a Korean official with the Korean Embassy in Chile, a man surnamed Park, making advances on a teenage school girl.

A Korean diplomat based in Chile is in hot water after being caught on camera sexually harassing an underage local girl.

He has since been recalled from his post and is likely to face criminal proceedings should he be found guilty, according to the Korean Ministry of Foreign Affairs, which emphasized through a statement Monday a “zero-tolerance principle” toward sexual harassment.

On Sunday, a Chilean TV show “En Su Propia Trampa,” or “In his own trap,” aired, exposing an official surnamed Park with the Korean Embassy in Chile making advances on a teenage school girl.

A preview clip of the show has gone viral on Facebook and other social media platforms over the weekend, and the official’s actions have caused a backlash locally and in Korea, as well.

The diplomat is seen in the video sitting on a park bench, caressing a female student’s neck and asking if he can kiss her. Park is seen asking the girl if she wants to become his “special friend” or “lover” as he strokes her leg. He is also seen in the doorway of a room, pulling her arm to force her inside as she begs him, “please, please.”

The documentary program producers began shadowing Park after receiving a tip that the official had sexually harassed an underage local female student he was teaching Korean language to back in September. The producers hired a 20-year-old woman to pose as a 13-year-old student and approach Park. They communicated over Facebook and met at a park.

The program describes Park as being responsible for the promotion of Korean culture, such as K-pop, to Chilean youth. The parents of the original girl who tipped off police about Park also appear on the show, expressing sorrow at what their daughter faced. The girl reported the harassment to Chilean police.

Despite the recalled official having diplomatic immunity, the ministry here said it plans to cooperate with Chilean police in the investigation process. Korean Foreign Minister Yun Byung-se was reported to have said at a meeting of senior officials Monday that the situation was one that “should not be tolerated” and called for “disciplinary actions certainly, and, if necessary, criminal proceedings.”