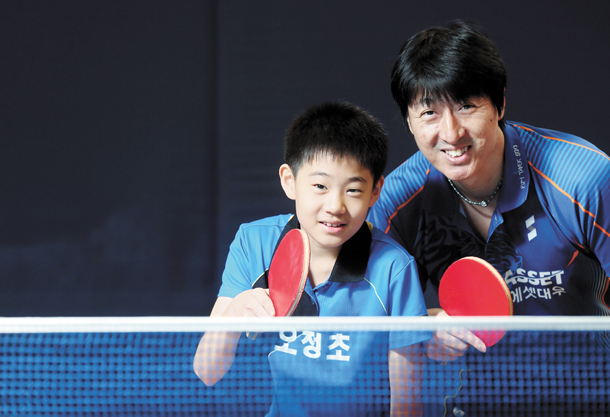 The father, right, and son, Jun-seong, share their thoughts in front of a table tennis table. Before the match, both pledged to play without regret. The father and son laughed as they held their rackets. [KIM SEONG-RYONG]

When all seemed lost, just one loss away from being knocked out of the tournament, they were able to clinch their first game in the third set at 11-8. A comeback victory was in sight with the fourth set contested by the Ohs, going to deuce until their opponents gained the upper-hand with a 11-13 victory.

But it is unlikely that this will be the last time the table tennis world will hear from the Oh team.

Among the 30 or so athletes at the Hogye gymnasium table tennis facility in Anyang, Gyeonggi, last Wednesday, there stood an elementary student at one end of the table while Oh ceaselessly returning the student’s balls, teaching form and technique.

The child was none other than Oh Jun-seong, 10, of Ojeong Elementary, ranked first in the fourth grade nationwide and, of course, Oh Sang-eun’s own son. The two entered the 70th National Men & Women’s All-Around Table Tennis Championship for the men’s doubles at the Gyeyang Gymnasium in Incheon on Friday.

There is no age limit for entering athletes in the domestic table tennis competition, but it was unprecedented for a father and son to compete as athletes together.

“From my knowledge, there isn’t such a thing even in China,” said Kim Tae-soo, 46, a member of Mirae Asset Daewoo’s corporate team. “A memorable pair indeed.”

The Oh pair faced Lee Gi-hoon and Jeong Nam-joo from Dongsan Middle School in Daejeon in the men’s doubles on Saturday. Dripping with sweat, they entered the all-around championship with passing the first round as their goal.

The son was focusing on polishing his forte, his backhand, which, not coincidentally, is also his father’s primary weapon. His father was methodically practicing with Jun-seong in order to pass down techniques. The two had even arranged hand signals to use during matches.

The father is a table tennis star who picked up 12 medals total from the 2000 Olympics (one silver, one bronze) and World Championship (two silver, eight bronze).

He is also a record-holder with the most wins, six, in individual men’s from the all-around championship. Jun-seong said, “He’s my father, but at the same time, he’s in the table tennis world as ‘that guy,’ so it’s an honor to appear with him.”

Oh said, “It’s like a dream to be a pair with my son. Before I resigned, I wanted to try at least once, thinking, ‘Will it work,’ but because of my coach, [Kim Tae-soo], and my team’s consideration, my dream was realized.”

In just five years, he became ranked first nationally among his peers. A person who had once returned Jun-seong’s ball, national team member Jung Yung-sik, 24, said, “Even though he’s only a fourth grader, he returns the ball with his backhand effortlessly.”

When asked about his son, Oh, said, “When I was an elementary student, at my best, I was around third place. If I was told to do something, it was my style to do it. But Jun-seong has a creative side. That’s taking after his mother.”

Oh added, “It’s not important to do well now. He has to pass through middle school, high school and then as an adult constantly develop. Instead of the present, he has to put more effort into the future.”

In his father’s eyes, Jun-seong was still a diamond in the rough.

“I learned a lot from my dad,” Jun-seong said. “I’m definitely going to wear [the national flag]. So, I want to defeat a Chinese athlete later and win a gold medal. I want to realize my father’s dream of winning a gold medal at the Olympics, who was unable to do so then.”