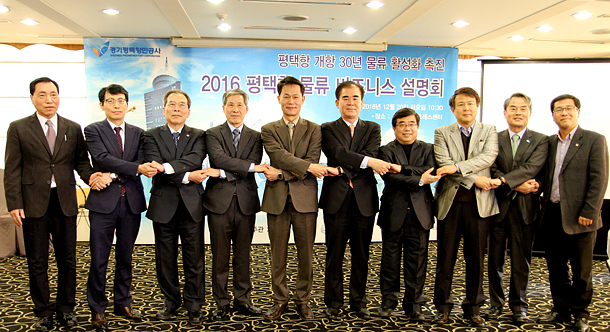 Government and corporate officials including Hwang Eui-seon, director of the Pyeongtaek Regional Office of Oceans and Fisheries, fifth from left, and Choi Gwang-il, CEO of the Gyeonggi Pyeongtaek Port Corporation, fifth from right, shake hands at the 2016 Logistics Business Conference for Pyeongtaek Port on Tuesday at the Press Center in central Seoul. As the port celebrates 30 years, participants discussed sustainable growth, future directions and improvement plans for the port, which plays a major role on logistics routes to China and Vietnam. It is the only port in the province of Gyeonggi devoted to trade. [GYEONGGI PYEONGTAEK PORT CORPORATION]