Left: In “Madang Nori - Here Comes Nolbo,” Heungbo, the good but poor younger brother gets seduced by beautiful women, “to make the show more realistic” according to the organizers. Right: A scene showing Heungbo, played by Yu Taepyeongyang, the youngest member of the company, and Heungbo’s wife, played by Seo Jeong-geum, holding two of their 12 children. [NATIONAL THEATER OF KOREA]

Madang nori refers to traditional Korean theater that combines various forms of folk entertainment, such as puppetry, mask dances and traditional percussion music. In the past, when farming was the major means of living, farmers used to add excitement to their laborious work by singing, dancing and playing traditional Korean rhythms on instruments. It later developed into a genre of traditional performing arts in 1980s as Koreans left the farming industry, often being performed in open-air arenas at local markets or town squares, as Madang Nori in Korean roughly translates as a “play in the yard” in English.

This year, the theater kicked off the third of its annual year-end series with “Madang Nori - Here Comes Nolbo,” which is based on the traditional Korean tale “Heungbu and Nolbu.” Two previous works are also based on popular traditional stories of Korea - the tale of Shim Cheong and the tale of Chunhyang. It’s Sohn’s first attempt in 32 years of staging a Madang Nori of this tale after “The Tale of Nolbo” in 1984.

The tale is based on “Heungbuga,” which is one of the five surviving stories of the Korean pansori (narrative singing). Heungbu, the poor but good-hearted man, cares for a swallow with a broken leg. The swallow repays Heungbu’s good deed by bringing him a gourd seed, which yields a large fruit that contains treasure. His rich and greedy older brother Nolbu hears about this, and intentionally breaks a swallow’s leg to become richer. Like Heungbu, the swallow brings him a gourd seed, but the fruit contained goblins. (The names of the brothers are more widely known as Heungbu and Nolbu, but pansori experts insist that the original name is Heungbo and Nolbo.)

For this year’s Madang Nori, the National Changgeuk Company’s oldest member, Kim Hak-yong, 51, plays Nolbo, while the company’s youngest member Yu Taepyeongyang, 24, plays Heungbo. The show kicked off on Dec. 8 and runs until Jan. 29 at the National Theater of Korea in central Seoul.

To hear more about the show, the JoongAng Sunday recently sat down with the two actors for an interview. Here are some edited excerpts. 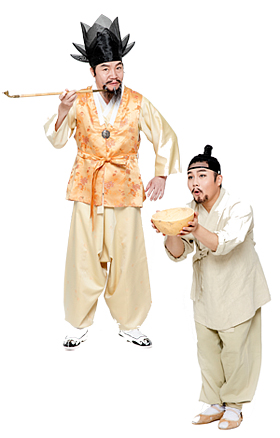 Q. The original title of the pansori is “Heungboga,” as the story revolves around the good brother. But why is Nolbo’s name on the upcoming Madang Nori’s title instead of Heungbo?

A. Yu: Madang Nori is a traditional performing arts genre that reflects the present day. That’s why, I think director Sohn wanted to talk about a lot of Nolbos out there in the present day.

Kim: To reflect the present day, it makes more sense to put Nolbo in the fore than Heungbo. Especially in such a time of political turmoil in the country, there’s a lot more to show with Nolbo’s characteristics than with Heungbo’s.

The characters of Nolbo and Heungbo for this performance seem to be quite different to the original story we are all familiar with. What do you think?

Yu: Director Sohn’s Nolbo is not an evil character that audiences come to loathe. His characteristics can be witnessed in many older generation Koreans today - being endlessly eager to amass wealth and never feeling satisfied… In the original pansori, Heungbo is portrayed as a good man who is obedient to older family members, including his mean brother Nolbo. But the Heungbo I play, he’s more realistic. I added laziness to the character. In this show, he’s a lazy man and that’s why it made him fall behind in the society, earning no money and even becoming a fool who knows nothing of the ways of the world. Director Sohn wanted me to create a more humorous character of Heungbo. He’s so nerdy and naive that he even gets lured by pretty women.

Kim: The scene where Heungbo gets seduced by charming ladies, laughter bursts out from the auditorium, and they mostly come from middle aged men. It attests to its reality.

Madang Nori is supposed to satire on the current society. I heard that since the premiere on Dec. 7, some parts of the story have been modified several times as the current events involving President Park Geun-hye and Choi Soon-sil develops. Is there no fixed script for this performance?

Kim: I lost a lot of weight because the lines kept on changing every other performance. So it was difficult to memorize the new lines and I got quite confused on stage. But I think the director will continue to make changes to the story as the real-life event that’s happening develops.

How have the responses from the audience been?

Kim: Madang Nori involves a lot of interaction between the actors on stage and people sitting in the auditorium. We frequently ask questions and try to converse with the audience members. But there are some people who don’t react to the questions tossed unexpectedly by the actors. Then there’s a problem. So before the show, we look around to pick out those who look like they’ll definitely respond and be humorous.

Yu: One audience member shouted out what kind of stamina food I eat to have so many children [Heungbo has many children]. That kind of interaction must be present in a Madang Nori. It gives energy to the actors on stage as we feel like we are really staging different shows for different people. Usually, I’m not so comfortable around the elderly but when I’m on stage, I’m not afraid to ask them silly questions. I feel like the wall between the generations collapses during the show. It’s also good to see more young audience members coming to see a changgeuk performance.

Yu, isn’t it your first time performing in a Madang Nori?

Yu: Yes it is. I’ve never performed it and never saw it. It’s been a very difficult journey for me because it feels like there’s no place to hide in Madang Nori. You can see all the face expressions that the audience makes from the stage and it requires you to continue ad-libbing, which is quite intense. The energy that comes from the auditorium is also very strong.

Kim: I’ve been performing in Madang Nori for three years since the National Theater of Korea launched this year-end changgeuk project. And I’m only now getting a little familiar to the show. At first, it was difficult for me to see all the feelings that the audience members are feeling from the stage, but now I feel anxious if I can’t read their faces.

Director Sohn said that Kim is the best actor suited to play Madang Nori. What do you think?

Yu: I certainly agree. If I played Nolbo, I would’ve never pulled out such a character. Kim has this unique tone in his voice that even the most serious lines becomes hilarious when said or sung by Kim. When we were practicing, everyone couldn’t stop laughing because of him. He’s usually quite quiet but as soon as he’s on stage, he’s the funniest person I know. He’s indeed a true artist.

Kim: If I have a sip of alcohol, I become quite a fun person to be around. I try to control myself on stage, and not overreact by getting blinded by being funny. I just try to be myself.

Heungbo’s family trying to cut a large gourd that was given by a swallow to repay Heungbo for caring for its broken leg. [NATIONAL THEATER OF KOREA]

National Changgeuk Company has been making efforts to bring in the audiences of all ages to their shows. Do you see the change?

Kim: Thanks to the National Theater of Korea’s support, the company has been making a lot of changes over the past few years to modernize changgeuk, which used to be regarded as a difficult and boring genre of traditional performing arts, even for adults. These days, I see a lot more young people and they are active in giving you feedback. Before such efforts were made, most performances were filled with audience members who come with invitation tickets. But in recent years, many younger people come to the show by purchasing tickets.

Yu: I’ve only been with the company for a year so I can’t compare, but I’ve been having such valuable experiences here. A friend of mine, who is not in this field, said he became a fan of the National Theater of Korea after watching the changgeuk “The Trogan Women,” which is based on the Greek tragedy, and told me that he’ll come and see the Madang Nori this time. He said that it’s more entertaining than going to watch films and that the money is worth it. After hearing that, I felt like it’s not too far for the average Korean to enjoy changgeuk like they enjoy movies.

In the show, Yu plays djembe, a goblet drum that originates from South Africa. I heard you learned how to play the instrument while you resided in South Africa for about four years during your teens. You grew up as a pansori prodigy, dipping your foot into this art when you were six. Why did you go to study in South Africa?

Yu: I believe that learning about cultures of other countries and the world music becomes your nourishment when you try to go out to the global market. I started doing gugak (traditional Korean music) because I just enjoyed it, but the more I study, I began to have a sense of duty as well. Especially during overseas shows, so many people cheer and give ovations after watching an unfamiliar show from Korea they’ve never heard of. I felt like they were acknowledging our artistry and that’s when I began to treat pansori and changgeuk as my mission. Learning percussion instruments really helps you when trying to master pansori beats and rhythms as well. I personally think it’s quite out of the blue for Heungbu in the show to play djembe, but the company’s artistic director Kim Seong-nyeo said it must be included in the show.