HMM will order up to 10 new ships next year

HMM will order up to 10 new ships next year 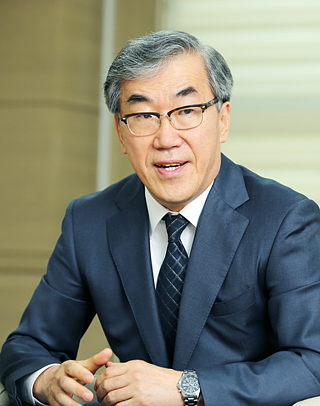 With concerns swirling that Hyundai Merchant Marine, the nation’s largest shipping line, might not be able to recover business to normal levels and pay back its debt, CEO Yoo Chang-keun laid out plans on Monday to turn around the company, including ordering up to 10 new vessels next year.

After losing its bid for core assets on Hanjin Shipping’s Asia-U.S. route to bulk carrier Korea Line Corporation, HMM then failed to gain full membership into 2M, the world’s largest shipping alliance led by Denmark’s Maersk Lines. HMM was unable to secure an agreement for full vessel sharing, only slot exchange and slot purchase agreements where the company can load containers into slots of partners’ vessels.

Many began to wonder whether the nation’s remaining global shipping line could bring business levels back to its glory days.

Yoo brushed off such concerns on Monday and listed specific goals to help reboot the shipping company. They include building up to 10 new vessels in the coming year, doubling vessel capacity and securing 5 percent market share as well as a 5 percent operating margin by 2021.

“Some say the recent partnership is not full-fledged,” Yoo said, referring to the 2M agreement. “However, we have secured shipping capacity that exceeds our current operation capacity by teaming up with Maersk and Mediterranean Shipping Company, and it is even a 20 percent increase compared to when we were part of G6, our former alliance.”

According to Yoo, partner companies must own vessels of similar capacity to ink a vessel-sharing agreement. In this case, HMM needs vessels capable of carrying 15,000 to 20,000 twenty-equivalent units, similar to Maersk and Mediterranean Shipping Company. HMM, though, only owns smaller vessels with 12,000 TEU capacity at most.

“Under current conditions, we can still benefit from using 2M’s large vessels, which are more efficient, and also maximize our service capabilities banking on 2M’s established sales networks,” Yoo said.

Some pointed out that the partnership actually restricts HMM from ordering new ships for the next three years, but Yoo argued there was no such clause that officially said HMM could not build new ships without 2M’s consent.

“We didn’t bother stating that clause because we had a basic consensus that it would be hard to order large container ships with capacity larger than 15,000 TEU for the next two to three years considering sluggish market conditions in the global shipping industry,” Yoo said.

“Still, we plan to order five small and midsize container ships after either returning chartered ships or breaking down ships,” Yoo said. “Apart from that, we also plan to order three to five extra very large crude carriers.” If HMM places the order, it will be the first since 2013.

Yoo seems to agree. “I know some underestimate the value of the recently inked strategic partnership, but it was the best deal considering the current situation of the company.” he said. “What’s important is that we have recovered the trust of our customers, the cargo owners. They actually say HMM’s service has improved.”

Yoo cited November data from PIERS and the Busan Port Authority as proof of such recovery. According to PIERS, a global trade tracker, HMM’s shipping volume from Asia to the American West Coast rose 61 percent year on year last month, pushing up the company’s rank on the route from 11th to fifth in terms of market share.

That same month, HMM handled 26 percent more cargo in Busan compared to last year. The company credits the boost to an extra loader that it deployed in September to fill the void left by Hanjin Shipping. The extra loader was used for regular service between Asia and the American West Coast in October.

Regarding its efforts to absorb Hanjin’s assets, Yoo said HMM was still on track to acquire minority shares of Hanjin’s terminal in Long Beach, California, through a consortium with Mediterranean Shipping Company.

It is also considering hiring 100 employees from Hanjin. “We have interviewed 160 applicants who were former workers at Hanjin and will soon head into a second round of screening,” Yoo said.