‘Choi scandal threw cold water on the nation’s good will’

‘Choi scandal threw cold water on the nation’s good will’ 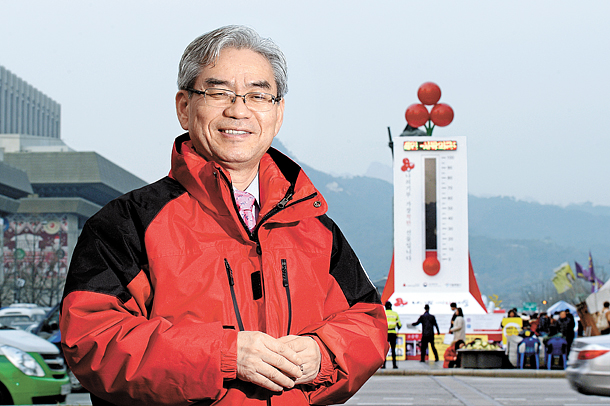 With crowds of people in Gwanghwamun Square, central Seoul, over the weekend taking part in mass rallies against the president amid a influence-peddling and corruption scandal, Park Chan-bong, secretary-general of Community Chest of Korea, points to the difficulty of fundraising this year.

A thermometer indicating how much donations the non-profit charity organization has raised, stationed at the center of the square, indicates it has reached the 23.5 degree mark — way below the numbers of the past.

Part of the reason the organization is falling short of its mark this year, Park points out, is the negative atmosphere brewing from the domestic political situation involving President Park Geung-hye and her confidante Choi Soon-sil, as well as the economic slowdown.

“But I am cautiously optimistic,” said Park of Community Chest. “I believe that our people even in difficult situations will overcome them and are capable in their own ways. I believe we will pass our target by Jan. 31.”

Park previously served as secretary general of the National Unification Advisory Council and a member of the Presidential Committee for Unification Preparation from 2013 to 2016.

He has served in the Ministry of Unification for some three decades, in positions including director general for unification policy and deputy minister for inter-Korean talks, having participated in South Korea’s delegation to the six-party talks.

One recent project includes building a community center in front of Seoul Station with KT, where residents of shanty houses can shower, wash their clothes and eat meals.

The most memorable donation this year, said Park, was by an elderly couple from North Chungcheong. The couple visited the Community Chest’s North Chungcheong branch in 2013 and donated 100 million won.

However, they chose to stay anonymous, so they only left behind a photograph of their feet clad in shoes.

Since the donation, the couple took part in the Community Chest fundraisers once or twice a month and showed continuous interest in how the donations are being used.

However, they disappeared from the radar earlier this year, and there was no means of contacting them.

Recently, the grandfather returned, this time alone. His wife had passed away in April.

“Donating and sharing is a continuous expression,” said Park. “For this couple, it was not a one-time event but a part of life, putting into practice the true meaning of donating.”

The non-profit charity organization dates back to 1966, when it was a fundraiser to help flood victims. Community Chest of Korea was officially founded in 1998.

Those who pledge to donate 100 million won over the next five years become a member of the Honor Society. Including 157 people who requested anonymity, there are 1,374 members of the honor society who have pledged a total of 146.4 billion won.


Q. What is your fundraising target this year?

A. Our annual target is 540 billion won. Between Nov. 21 and Jan. 31 of next year is when we are heavily concentrating on fundraising, and the target for this period is 358.8 billion won. In order to reach the same target as last year during the fundraising period, we need to have reached 20 percent of our goal, but we are 10 percent short compared to last year (or 36 billion won).


Why do you think Community Chest fell short of its target so far?

There are two aspects to this. The economic condition, including the economic slowdown, is the first aspect. The second aspect is the currently unfolding political situation that is darkly looming over our society. There is a dark atmosphere making it difficult to open the hearts of those who would like to donate.


The heads of major conglomerates have been summoned for parliamentary hearings, so does this situation have some impact, as well?


What is the ratio between donations by corporations and individuals?

It is seven to three.


Then a turning of the tables would be desirable?

I believe there are strengths and weaknesses to this. When individual donations increase, this reflects a positive aspect that our society’s overall perception of sharing is proliferating. However, this doesn’t necessarily mean that the increase of the company’s role is necessarily a bad thing.

It shows that corporations hold a large interest in social contribution and is desirable in terms of corporate culture.

From meeting with corporate personnel, they do not consider donating as quasi-tax measures. They do not just have profit-earning motivations. Corporations also have a role in society, and through societal contributions, corporations can improve their image, so they think that this is a role they must play.


How are the donations allocated?

Alleviating poverty is a large priority for us, as well as assisting the treatment of disease and addressing the estrangement issue. We want to help those who are alienated in our society. Youth estrangement, broken homes, multiethnic families and defectors are included.

Sometimes organizations or groups request our support, as well. We also receive applications after publicly announcing a certain objective.


How do you distinguish the work of the government and civilians?

The role of public welfare is important in in order to make our society healthy and cohesive. Civilian donations are voluntary in nature. This process of providing support is likewise undertaken by volunteers, so it is filled with sincere affection and interest. As an integrated, healthy society, welfare carried out through voluntary donations has the effect of building a sound and steady society.


Some people are critical about activities that they feel should be done by the government being carried out by Community Chest.

That is an area we are vigilant about. In terms of welfare, the private sector needs independence. Rather than going a different direction, it has to be complementary. What is important is information exchange with the public sector, such as who to go to, as well as sharing what areas that public welfare cannot cover, and it is our role to supplement such blind spots.


How do you plan to develop the Community Chest?

Fundamentally, we aim to aid people facing difficulty domestically. The area we need to further worry about is aiding our overseas nationals.

Of our 7.2 million overseas nationals, there are some who are able to donate, and those who are facing difficulties. We plan to draw in these people to foster an atmosphere where the overseas Korean society can also give and receive aid.


You visited the United States recently?

This first location started in Los Angeles and is spreading across the United States, and we plan to expand to other countries such as Japan, to mobilize the global Korean community and enable a joint welfare system.


And what other plans do you have in mind?

When we help foreign people facing difficulties, we have to go through an international relief organization. That is why, from the perspective of the person receiving aid, they will only remember that specific international relief organization and not know that support came from Korea. If we can aid them as the Community Chest, these recipients will have a good perception of Korea, and I think we need to play this sort of role in the future.