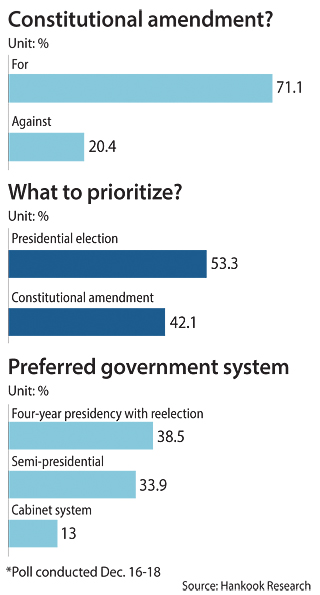 Over 71 percent of respondents said in a survey released Monday they support an amendment of the Constitution to introduce a new governing system.

By contrast, only 20.4 percent of respondents said there was “no need” for constitutional reform, according to the survey conducted by the public opinion research firm Hankook Research between Friday and Sunday of 1,000 people eligible to vote nationwide.

When split by region, 65.4 percent of respondents in Seoul, the highest percentage nationwide, said the presidential election need to be prioritized, while 31.2 percent in the capital gave preference to constitutional amendment.

When asked about the timing of a constitutional amendment, 64.4 percent polled responded, “it is preferable to slowly revise it even if it takes a long time,” while 35.5 percent said the process must “start quickly so it is revised by the first half of next year.”

As for the format of the constitutional amendment, 40.5 percent said that the National Assembly should take the lead and that the next administration should go through with it. But around a third of respondents, or 32.2 percent, said, “A presidential candidate should make a pledge and the next government should push through with it.”

A fifth, or 20.2 percent, polled called for quicker action, saying, “With the leadership of the National Assembly, the current government needs to push through with it.”

“While those eligible to vote think there is a need for constitutional amendment,” said Kim Choon-sik, director of Hankook Research, “the predominant viewpoint seems to be that there is no need to rush it.”

Among these respondents, 38.5 percent prefer a four-year U.S.-style presidency that allows reelection, while 33.9 percent prefer the semi-presidential system in which responsibilities are divided between president, prime minister and cabinet. Some 13 percent called for a Japan-like parliamentary cabinet system.

A Korean president is currently elected to a single five-year term to prevent any drift to the authoritarianism Koreans formerly suffered under for decades.

According to the survey, Lee Jae-myung, the mayor of Seongnam, whose popularity spiked in recent weeks following his blunt calls for President Park Geun-hye to resign, came in as the most appealing presidential candidate polling at 31.4 percent.

Moon Jae-in, the former chairman of the main opposition Minjoo Party of Korea, trailed closely behind at 30.6 percent, followed by UN Secretary General Ban Ki-moon at 29.2 percent and An Hee-jung, governor of South Chungcheong, at 26.8 percent.

When asked who the most unappealing candidate is, Rep. Yoo Seong-min of the ruling Saenuri Party, who is of the faction against President Park and UN Secretary General Ban, came in at 49.6 percent, while Nam Kyung-pil, governor of Gyeonggi, came in at 43.1 percent and Gov. An at 38.6 percent. Seongnam Mayor Lee polled as least unappealing at 30.6 percent.

Asked why they think pro-amendment politicians are calling for constitutional revision, 57.7 percent responded, “for their political interests,” while 31.6 percent said, “in order to decrease the concentration of authority on the president.”