Hwang says he has no interest in running for president

Hwang says he has no interest in running for president 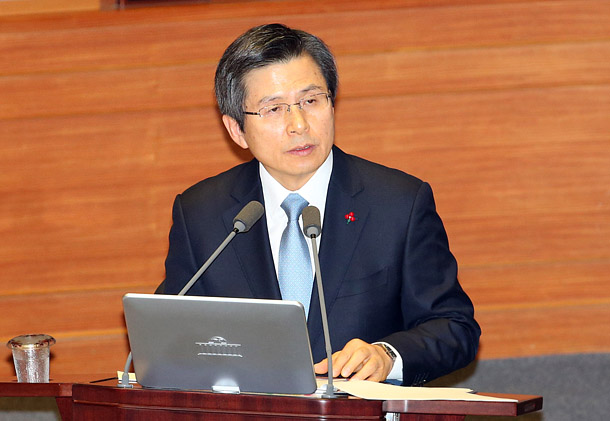 Hit with the question of whether he was considering running for the presidency, acting president and Prime Minister Hwang Kyo-ahn flatly denied having any interest during the interpellation session at the National Assembly on Tuesday.

“Are you aware of criticisms against you that say you are acting too much like a president?” asked Rep. Chae Yi-bae of the People’s Party. He uploaded on the screen a photo from Hwang’s Facebook page showing him meeting the merchants of Jungang Market of Yanggu County, Gangwon.

“Are you planning to run for presidency?” Chae asked.

“I must ask you to be careful in how you appear in front of the people,” Chae said. “Now is the time for you to minimize national confusion and focus your energy on uprooting the country from the deep-seated evil of President Park Geun-hye’s corruption.”

Criticized once more on his role as the acting president by Rep. Kim Jin-pyo of the main opposition Minjoo Party of Korea, Hwang said, “I am aware of the criticisms, but I maintain my position that officials must be nominated to posts that will be vacated soon.”

Hwang had last week announced that he will nominate some 20 heads of public organizations.

“I will, of course, be receiving nomination suggestions,” Hwang added.

Questions on upcoming decisions in foreign policy, including Korea’s responses to the incoming Donald J. Trump administration, the Korea-U.S. FTA, military expenses and upcoming hikes in the Fed rate, as well as domestic policies like local government subsidies, national growth rate, next year’s budget, the shipbuilding industries’ restructuring, and more related to the Choi Soon-sil scandal were raised at the Assembly.

“Trump had called the Korea-U.S. FTA a disaster,” said Rep. Ham Jin-gyu of the Saenuri Party. “But as you must know, the bilateral trade has been growing steadily ever since the FTA was signed. What are your thoughts?”

“The government is coming up with various contingency plans to respond,” Hwang said. “The Korean government communicated with the Trump campaign via various channels more than 100 times during the election, and its efforts will continue.”

Questions on the avian influenza were also raised.

“The avian influenza spread throughout the country within a month,” said Saenuri Rep. Jeong Woon-chun. “What has the prime minister been doing while the country came to a point of culling 19 million chickens and ducks?”

“The central government has issued orders for an all-out government effort to contain the disease, using former experience in containing the Middle East respiratory syndrome,” Hwang said. “But the avian influenza this year is a different kind that spreads more quickly over a short span of time, and we are having more difficulty containing it.”

“We will decide on 68 percent of the year’s budget by the early half of next year,” Yoo said, “and after seeing how things go in the first quarter, the government will decide whether to draft a revised supplementary budget.”

“The national debt is still at the level of some 40 percent of the country’s GDP,” Yoo added. “So there is still some room to extend the budget.”

Meanwhile, the Assembly’s special committee investigating Choi-gate will host a meeting today to question executives of the K-Sports Foundation tied to Choi.