Top diplomat defector will take a public role in the South

Top diplomat defector will take a public role in the South 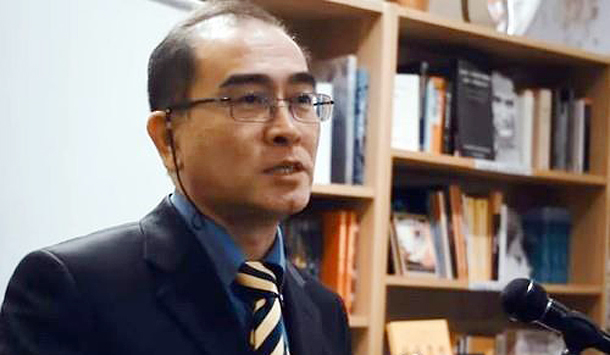 Thae Yong-ho, the senior North Korean diplomat who defected to the South with his family in August, will begin public activities starting Friday. The former deputy ambassador in London says he wants to dedicate his life to reunification.

“Rather than seeking personal success, I want to dedicate my life to enabling a quicker unification — the hope of our people — so that the North Korean people can be freed from oppression and persecution,” Thae was quoted as saying to a group of lawmakers Monday.

Various government sources Tuesday say that Thae, the most senior North Korean diplomat to ever defect, is expected to work as a researcher of North Korea affairs at a state institute affiliated with the National Intelligence Service (NIS). He is expected to remain in the public eye, unlike other senior North Korean defectors who remain private. That could bring risks to his personal safety
Rep. Lee Cheol-woo, chair of the National Assembly’s intelligence committee, held a three-hour close-door meeting with Thae in Seoul on Monday with a bipartisan group of lawmakers on the committee.

After the meeting, Lee told reporters that Thae had said that the higher the rank of North Korean officials, the more stringent the surveillance on them. He said it was commonplace for their residences to be bugged.

Thae said that Hyon Yong-chol, North Korea’s former defense chief, was executed because of something he said in his own house. Hyon didn’t know his home was bugged, Thae said.

In May 2015, the NIS revealed that former North Korea Defense Minister Hyon, a four-star general, had been executed the previous month, accused of treason and disloyalty to the North Korean leader. Describing his own fleeing of the United Kingdom last July, Thae said he felt “disillusioned” by North Korean leader Kim Jong-un’s reign of terror and wanted to save his sons from a life of “slavery.”

After spending many years abroad, Thae learned about South Korea’s democracy and economic development through movies and dramas.

A longing for a liberal democratic system grew within him, and he decided to defect.

“As he realized the wretched reality of North Koreans’ slavery under Kim Jong-un’s reign of terror and oppression, his disillusionment with the system grew, and he decided to defect,” Lee said. “At the time of defection, he told his sons: ‘From this point on, I will break the chain of slavery.’ And after arriving here, he felt regret for not having the courage to defect earlier.”

Lee quoted Thae as saying, “Kim Jong-un is still young, so if his rule continues for decades, there will be many senior officials who suffer from depression thinking that their children and grandchildren will be subjugated to a life of slavery.”

Thae was also said to have pointed out that he believes without Kim Jong-un, the regime would completely collapse because “there is no second-in-charge.”

The North Korean elite, Thae conveyed, are feigning loyalty to Kim Jong-un and are afraid of what will happen to them if the North Korean system collapses.

Thae said he worries that if there is political upheaval in North Korea, the Pyongyang elite will flee to China, not South Korea. He hopes South Korea’s laws and system changes to show the North Korean elite that they can lead regular lives here. He said more North Korean elites would try to defect to the South if they can be assured of decent jobs here.

The former No. 2 diplomat in London fled the embassy in mid-July and arrived in South Korea in August with his wife and two sons. He also clarified previous reports that his daughter was not able to defect with the family, saying he only has two sons.

Since his arrival in Seoul, Thae has been cooperating in an investigation led by the NIS and is set to be released Friday, when the probe comes to an end.

Thae also denied the North Korean government’s accusations that he had fled because he was afraid of punishment for crimes such as embezzlement.

He said that because he expected Pyongyang to make such accusations, he had balanced accounts at the embassy in London before his defection and taken pictures of accounts and receipts as evidence.