Children from a nearby day care center stand on stage in Santa costumes during the 2016 Santa Expedition event in front of ChildFund Korea’s headquarters in Mugyo-dong, Jung District, central Seoul on Dec. 13. The event is in its tenth year this year. [CHILDFUND KOREA]

Donations to charity and welfare organizations experienced a precipitous drop this year as a consequence of domestic politics and policies.

But extraneous circumstances didn’t stop two Santa Clauses from bringing holiday cheer to 15-year old Hwang Seon-woo on Tuesday afternoon at the hospital where he is receiving treatment. Suffering from multiple disabilities, Seon-woo underwent waist as well as joint surgery, and is constantly undergoing rehabilitation at a hospital near his home.

His disabilities were so serious he was unable to hold a spoon, but now, thanks to his surgery, he can walk. 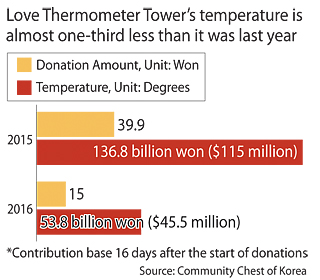 This year, however, the donation drive has performed poorly. The Choi Soon-sil scandal and so-called Kim Young-ran law, which prohibits solicitation and graft, have brought on a cold front.

Last Tuesday, a government-sanctioned non-profit organization, Community Chest of Korea’s Thermometer of Love, located at Gwanghwamun Plaza, showed the temperature to be 15 degrees Celsius, which means 15 percent of the total fundraising goal has been met. On the same day last year, the temperature was 39.9 degrees.

“The special investigations are our top priority,” one conglomerate executive in charge of corporate social responsibility said, “so we were unable to set a plan. No matter how aggressively I push for donations, the mood isn’t good.”

Under such circumstances, nonprofit organizations have started numerous campaigns and events to encourage people to contribute. One NPO representative said, “Although it may be a difficult situation with the recession and the messy state of affairs overall, in order to lead in a spirit of charity, we are waging an all-out war for donations.”

ChildFund Korea’s Masked Santas is in its tenth year this year, fulfilling the wishes of low-income children nationwide and delivering warm clothes and other gifts. This year, 27 locations all over the country have realized 5,039 wishes.

Save the Children will have a live broadcast on Facebook for the Knit a Hat to Save Newborns effort, also in its tenth year. Knit a Hat is a participatory donation campaign to prevent Asian and African newborn babies from dying of hypothermia.

Save the Children’s honorary ambassador, broadcaster Bang Gyeong-rim, 37, has broadcast the effort’s message since November and will continue to do so until February. There are also efforts to attract donations.

Compassion Korea is hosting Lee Dong-sik’s exhibit, “Change: Poverty to Hope,” to help people witness the lives of children living on the other side of the world. The exhibit will be held in its office building in Hannam-dong, central Seoul, from Dec. 10 to Dec. 22.

There is also an event to collect blankets for low-income families through a single text message. The BlanketTALK campaign allows one to text designated number, 3396, to Habitat for Humanity Korea, which will then automatically donate 2,000 won per text.

Also, Good Neighbors and Korea District Heating Corp. collaborated to start the Neighbor’s Winter campaign to cover the heating costs of those in need as well as collecting warm clothes and fire extinguishers for fire prevention.

So far, 384 households have been provided a total of 447 million won.