Sales of Korea’s companies keep rising but hiring is weak

Sales of Korea’s companies keep rising but hiring is weak 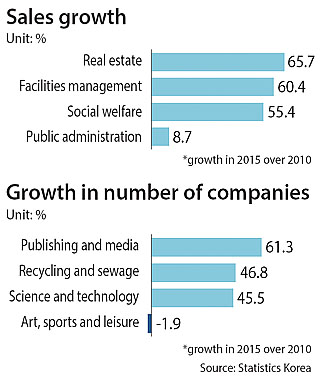 Even though local corporations’ sales continue to rise, the number of employees they hire is growing at a slower rate, largely due to a weak manufacturing sector, according to government data.

A report by Statistics Korea showed that revenues of local corporations rose to 5,303 trillion won ($4.45 trillion) last year, an increase of 22.4 percent compared to 2010. The biggest factor in the rise was buoyancy in the real estate sector, where revenues grew 65.7 percent over the same five-year period.

“The local real estate market started to recover starting in 2013, which helped local realtors, construction firms and building management businesses,” said an official at Statistics Korea. “Revenues of companies rose at a faster rate compared to the number of newly hired workers, as more companies use contract and part time workers.”

Revenues in the manufacturing sector, which accounts for one third of total revenues of Korean companies, only managed to rise 16.9 percent in the five-year period.

The total number of businesses rose 15.5 percent from five years ago to 3.87 million last year and the figure for publishing, media and broadcasting companies rose by the most at 61.3 percent. The only sector in which the number dropped compared to five years ago was art, sports and leisure.

“The number of billiard halls and karaoke bars has dropped compared to the past and their overall sales dropped,” the official said.

The data showed that nearly half of Korea’s companies are located in the Seoul metropolitan area and that the concentration is larger than ever.

According to the statistics agency, 47.4 percent of businesses were located in the Seoul metropolitan area, which is 0.3 percentage points higher than the 47.1 percent recorded in 2010. The number of employees in the metropolitan region was 51.4 percent of the total, or 10.69 million.

By regions, revenues of companies in Seoul hit 1,617 trillion won last year, followed by Gyeonggi with 1,071 trillion won and South Gyeongsang with 306 trillion won. Sales in the Seoul metropolitan area were 55.1 percent of the total, compared to 47.4 percent in 2010.

Revenues of companies on the southern island of Jeju rose by the most, 48.2 percent, to reach 38 trillion won.

“There were many female CEOs in lodging and restaurant businesses compared to the past,” said the official at the statistics agency. More than 62 percent of restaurant and lodging facilities were owned by women, the data showed.

The number of female employees in Korea rose 1.2 percentage points from 41.1 percent of the total in 2010 to 42.3 percent last year at 8.78 million. Nearly 80 percent of people working in the health care and social welfare sectors were women.