Top podcasts give listeners freedom : Apple Korea names a diverse list as some of the year’s best shows

Top podcasts give listeners freedom : Apple Korea names a diverse list as some of the year’s best shows

Some watch TV in their leisure time to forget their troubles, while others turn on the radio to listen to their favorite songs or talk shows. But mothers with young children don’t often have the luxury of being able to catch live programs or enough time to sit through a full show.

Podcasts have found popularity with mothers and many others who are looking for on demand entertainment that they can pause and come back to whenever they have time. In fact, a podcast made specifically for mothers was honored along with nine others by iTunes in Korea as one of the Programs that Shined in 2016 this week.

The iTunes Podcasts team has chosen 10 shows with topics ranging from music to movies, computer programming to books, history and even travel.

“For moms, it is sometimes difficult to know that there is a world that exists outside of their homes,” said Kim So-hyang, one of the six moms that have made the show titled “Time for Moms” since May, which has uploaded 31 episodes with accumulated around 450,000 downloads. 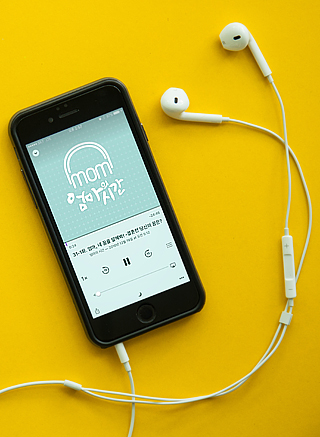 Considering that many moms can’t be occupied with the show for too long, the one hour show is even divided into two sections so that moms can easily rewind and have a listen. The show talks about the dreams that new mothers had before giving birth and has discussions about the best ways for mothers to return to the workforce after giving birth, alongside childcare tips.

“We also invite moms who have professional careers like herbal medicine pharmacists, lawmakers and writers, who can inspire many mothers who may think they are sacrificing their time for their kids at the moment so that they can also grow their career while raising children,” Kim added.

Some of the shows on the year-end list are hosted by celebrities. “Music Show without Music” is a talk show with four hosts, including rock musician Kim Jong-seo, singer Lee Se-joon of Yurisangja, solo singer Hong Kyung-min and TV music show producer Kwon Jae-young. All of them have spent some time in the music industry, and they talk about behind-the-scenes stories that they have rarely shared and also talk about the old-school Korean pop songs that provide a strong foundation to the trendy K-pop scene now.

Another podcast on the list is “Classic Study Institute,” which not only introduces some well-known classical music but also provides an insider’s look at the terms often used to describe the music and the interesting stories behind the names of famous classical pieces.

The show “Cinemaster” talks about trends in the movie industry and how to best appreciate classic cinema, while “I’m a Programmer” gives tips and tricks to those interested in technology to become more savvy with the tools that can make their digital devices better.