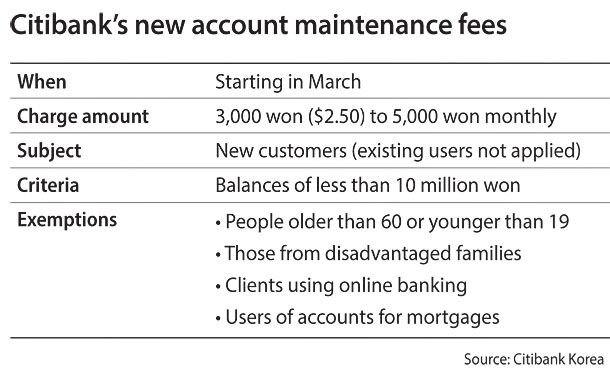 Citibank Korea will begin charging a monthly fee for accounts with low balances, reintroducing a measure that faced public backlash 15 years ago.

The fee will range from 3,000 won ($2.50) to 5,000 won for an account with less than 10 million won, the company said Wednesday. The U.S.-based bank has filed an application to Korea’s financial regulator, the Financial Supervisory Service, to revise its terms to include the charge.

The bank hopes to put the maintenance fee into effect next March. Only new clients who open accounts after implementation will be subject to the charge. It will be waived for customers who maintain a combined balance of over 10 million won in savings, insurance and investment accounts.

The fee will also be waived for those over 60 and under 19 as well as low-income families. Users of Citi’s online and mobile banking services will also be exempt, along with accounts used solely for mortgages and fund products.

Charging maintenance fees for low-balance accounts, though common in the United States, is unusual in Korea. Standard Chartered Bank Korea experimented with charging a 2,000 won maintenance fee in 2001 but stopped after three years due to customer complaints.

Acknowledging potential discontent from the public, Citi explained the move was intended to promote the use of digital banking. The question is whether other local banks will followsuit.

“The adoption of the maintenance fee is aimed at strengthening ties between customers and the bank and promoting the use of digital channels,” the bank said in a statement. “Even new customers will be charged only during months in which they visit a Citibank. If a customer only uses digital banking, he or she won’t need to pay.”