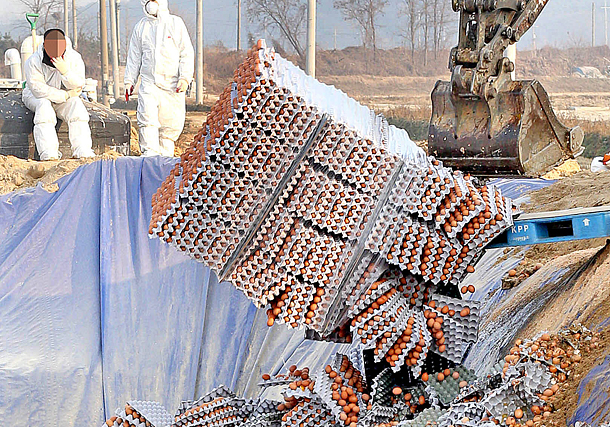 I went grocery shopping at Hanaro Mart in Yangjae-dong in southern Seoul last weekend. The egg shelves were nearly empty, and I quickly took one of the few remaining cases. Two days later, it was announced that shoppers are limited to one case of eggs.

Eggs are a beloved staple on the table, affordable and nutritious. Only a month ago, a case of 30 eggs was priced at 5,048 won ($4.20), and people could have quality protein for less than 200 won per egg. Families with children and elderly and even people who live alone and do little cooking never fail to buy eggs when shopping for groceries.

An egg contains 7 grams of protein, and 30 grams of pork shoulder contains the same amount and yet cost three times more.

Eggs last three to four weeks at most when refrigerated. But people are feeling anxious, looking for stores that sell eggs for less and stocking up.

A few months ago, Korean eggs were exported to Hong Kong by air as Korea was free of bird flu (AI). Due to the limited land size, Hong Kong imports 70 percent of its eggs from the United States, China and Japan.

Now, the situation has changed. As a result of the devastating failure to prevent AI here, Korea now has to import eggs from other countries. The government plans to subsidize air shipment costs to import eggs and chickens that can lay eggs. The United States, Canada, Spain, Australia and New Zealand are being considered.

But the eggs in these countries are more expensive than Korean eggs even without shipping costs. A Ministry of Agriculture, Food and Rural Affairs official said that even when imported eggs are flown in, the shipping costs would not be subsidized. Also, authorities have decided to receive deliveries by air but not from where, how much and when. For now, Koreans can’t enjoy affordable and safe eggs.

How about the growing distrust of the government, as we can’t even feel assured to consume eggs? In 2014, a case of 30 eggs rose to 7,000 won due to an AI outbreak, and now, it is a matter of time before we break another record. Is it because of the political turmoil? Or did the authorities never have the capacity to prevent a crisis? The same crisis is repeated year after year, and the government must answer to consumers. It is simply too sad to skip fried eggs over our kimchi fried rice.