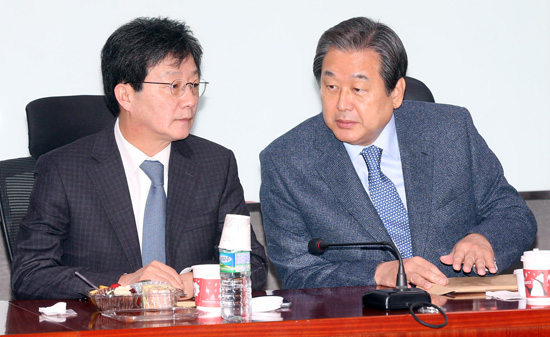 Saenuri lawmakers outside the pro-Park Geun-hye faction said Wednesday they will defect from the party en masse next week to create a new conservative party.

A group of 31 Saenuri lawmakers will break away, according to Rep. Hwang Young-cheul, who has been serving as a spokesman for the anti-Park faction.

“Of 33 lawmakers who attended a meeting today, 31 of us joined the cause of defection,” said Hwang following a meeting at the National Assembly Wednesday morning.

He said the group expected more Saenuri members join the cause before next Tuesday, the defection deadline.

The Wednesday meeting was attended by Rep. Yoo Seong-min and former Saenuri chairman Kim Moo-sung, both considered de facto leaders of the anti-Park movement within the Saenuri.

The decision to defect came after the anti-Park faction failed to win control of the party last Friday when Rep. Na Kyung-won lost an in-party race to become the party’s floor leader to a pro-Park lawmaker, Chung Woo-taik. Na’s defeat came across as a deep disappointment to lawmakers who voted to impeach the president on Dec. 9 in the aftermath of the party’s drop in approval ratings as a result of a grave abuse of power scandal. The Saenuri’s approval rating nosedived to 15 percent while its rival Minjoo Party enjoyed a 40-percent-approval rating in the latest poll.

The Wednesday announcement came after the pro-Park faction turned down a demand by Park adversaries that Rep. Yoo take charge of the party as an interim leader. The anti-Park group gave an ultimatum they would defect unless their demand was met.

The number of lawmakers intent on leaving the Saenuri could increase in the coming days, though it remains to be seen by how many. To form a political party with negotiation power at the Assembly, it must have 20 lawmakers.