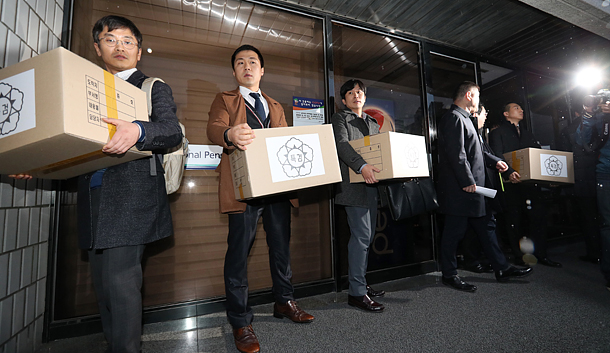 Investigators from the independent counsel team take out boxes of documents after they raided and searched the investment management office of the National Pension Service in Gangnam District, southern Seoul, on Wednesday. [YONHAP]


A bribery charge involving the Samsung Group, President Park Geun-hye and her controversial friend Choi Soon-sil was revealed as the first target of an ambitious investigation launched Wednesday by an independent counsel.

After 20 days of preparation, independent counsel Park Young-soo and his team formally launched a probe into the bizarre political scandal involving Park, Choi Soon-sil and conglomerates, which led to the impeachment of the president earlier this month.

On the first day of its 70-day probe, investigators from the independent counsel raided the state-run pension corporation to investigate the suspicion that Park and Choi influenced its support for a controversial merger of Samsung Group's two units last year.

The $8 billion merger between Samsung C&T and Cheil Industries allowed the Samsung Group a restructuring that is part of a generational leadership shift by solidifying heir apparent Lee Jae-yong’s grip on Samsung Electronics. Defeating a campaign by a U.S. hedge fund to block the planned merger, shareholders of Samsung C&T approved its takeover by Cheil Industries on July 17, 2015.

The National Pension Service, the world’s third-largest pension fund and Korea's largest institutional investor, was the largest shareholder of Samsung C&T, owning a 9.54 percent stake at the time. Although advisory firms in Korea and abroad recommended the pension fund vote against the merger, it went ahead and supported the deal, fueling suspicions of undue influence over the decision.

Samsung Electronics was a generous supporter of Choi’s daughter Chung Yoo-ra, an equestrian athlete. It promised 22 billion won ($18.4 million) for her training. It also signed a contract with a company created by Choi in Germany and paid about 8 billion won.

Samsung Group is also the largest benefactor of the two nonprofit foundations that Choi practically controlled. It contributed 20.4 billion won. Choi was indicted last month on charges coercing conglomerates to make massive donations to the foundations in collusion with President Park.

The generous sponsorship and donations are suspected as bribes in return for Park’s and Choi’s influence over the pension service to approve the deal. Determining whether the money Samsung gave to Choi was a bribe is the top priority of investigators at the independent counsel.

“We are raiding the welfare ministry, the pension service and some officials to secure evidence of Samsung’s alleged third-party bribery and the pension service’s alleged breach of trust,” said Lee Kyu-chul, assistant independent counsel and spokesman for the investigation team.

The prosecution’s special investigation team already looked into the case as a part of its initial investigation into the Choi scandal. The pension service was raided in November, and Lee said Wednesday’s raids were to gather additional evidence.

Third-party bribery is a punishable crime in Korea’s Criminal Act. “A public official or an arbitrator who causes, demands or promises a bribe to be given to a third party on acceptance of an unjust solicitation in connection with his duties shall be punished by imprisonment for not more than five years or suspension of qualifications for not more than ten years,” article 130 of the act says.

The independent counsel team said it plans to summon the officials who made the pension service’s dubious decision last year. Former Welfare Minister Moon Hyung-pyo, current head of the pension service, and Choi Kwang, who headed the fund at the time, are among those to be questioned.

Speculations are high that Samsung Vice Chairman Lee may also become the target of the investigation. Lee was barred from leaving the country since Dec. 13, 2016.

The investigators also obtained a warrant to arrest Chung, currently staying in Germany, on charges of obstruction of business. Chung was accused of entering Ewha Woman’s University using her mother Choi’s power and received high grades without attending class.

“We obtained the warrant on Tuesday, and we will seek the German prosecution’s cooperation,” said Assistant Independent Counsel Lee.

The independent counsel team also invalidated Chung’s passport and is seeking to file an extradition request.

The independent counsel team also held a ceremony on Wednesday to formally open its office. “I will faithfully read the people’s will and conduct an unbiased investigation based on law and principle,” Independent Counsel Park said.

In addition to the Samsung case, the team will look into a wide range of suspicions, including the alleged nonfeasance of President Park during the crucial early hours of the Sewol ferry’s sinking in April 2014. The team also plans to investigate other abuse of power allegations involving Kim Ki-choon, former Blue House presidential chief of staff, and Woo Byung-woo, former senior civil affairs secretary to the president.