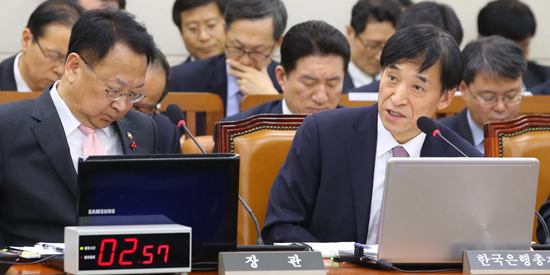 Finance Minister Yoo Il-ho, left, with Bank of Korea Gov. Lee Ju-yeol during a session with lawmakers at the National Assembly in Yeouido, western Seoul, on Thursday. Lee argues the government should focus on fiscal policy to boost the economy. [YONHAP]

Lee Ju-yeol, head of the country’s central bank, has long been considered unassuming in his tone on the assessment of the economy and future rate-setting moves, but he has recently turned more assertive in pitching the role of the government in steering the economy.

In his latest meeting with reporters late Wednesday, the Bank of Korea governor made clear that fiscal policy should play a bigger role than monetary policy, pressing the Ministry of Strategy and Finance to do more to boost the sagging economy.

“The argument that central banks can no longer do all the heavy lifting with a zero interest rate, quantitative easing and even negative interest rates is gaining traction,” Lee said. “An era of fiscal policy has arrived.”

“Financial institutions, including local and global credit rating agencies, say that one of the biggest strong aspects of Korea’s economy lies in more room for fiscal boosts and fiscal policy,” he added. “And I agree with them.”

While he did not mention a specific agency, Moody’s released a report earlier this month saying that “very high fiscal strength allows for flexibility in addressing negative economic shocks, and we believe the [Korean] government will continue to be willing and able to use its fiscal space.”

Lee indicated that the government’s fiscal spending for 2017 falls short of his expectation. “Based on the budget, next year’s government budget is far from accommodating.”

He noted that next year’s total spending is only up 0.5 percent, a modest increase given that the nominal growth rate typically hovers around 4 percent.

Lee cited a book titled “The Only Game in Town: Central Banks, Instability, and Avoiding the Next Collapse” by Egyptian-American economist Mohamed El-Erian as another basis for stronger role of the government. “The title implies that in responding to the global financial crisis, the government sat on the sidelines, and the central banks came at the forefront. But the latest arguments hold that ‘the only game in town’ should move from central banks to governments.”

His remarks can be also interpreted as a sign that the Bank of Korea will not likely lower its interest rates any further especially since the U.S. Federal Reserve has taken steps toward raising its rates. Lee’s stance is in line with comments he made during a press briefing after the Bank of Korea held its rates steady following the Fed’s rate increase earlier this month.

As for calls for an additional rate cut, Lee said, “Now we are in a situation where economic stabilization carries weight.”

While they might disagree on the fiscal-monetary policy balance, both agree that 2017 will be a tough year. Yoo and Lee said Korea’s economy will grow below the 3 percent level during a regular report to the National Assembly on Thursday.

The Ministry of Strategy and Finance is expected to revise its outlook next week and could trim down the current 3 percent estimation.

Lee also said the Bank of Korea will cut its economic outlook next month, which currently stands at 2.8 percent.