The number of babies born in Korea contracted for the 11th consecutive month as fewer people are getting married. 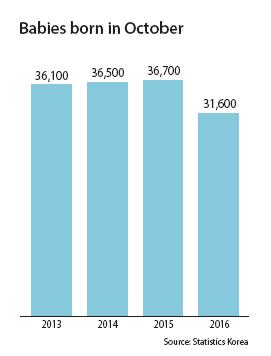 A Statistics Korea report released Thursday showed that 31,600 babies were born in October, down 13.9 percent from the previous year. This is the lowest number of birth in an October since data started being compiled in its current form in 2000.

A total of 349,000 babies were born this year through October, 6.4 percent fewer than in the same period last year. If the current pace continues, it is likely that the annual figure for babies born will fall below the 430,000 level for the first time since 2000.

The number of people getting married fell 5.2 percent year on year to 22,000 unions in October. The figure for this year up to October also dropped 6.4 percent to 227,900.

“Fewer Koreans are getting married in general and the average age of Korean brides continues to rise when compared to the past,” said Lee Jee-yeon, a director at Statistics Korea. She added that weak economic conditions have put a greater financial burden on young people and that many decide to postpone marriage or not get married at all.

Daegu was the only major city that saw the number of marriages increase. The number fell in 9 other major cities including Seoul, Incheon and Gwangju.

As there are fewer people getting married, the number of divorce cases reported to the government has dropped as well.

Divorces in October totaled 9,000, down 8.2 percent from a year earlier. Divorces fell in seven major cities.

The number of Koreans who passed away in October rose 2.2 percent year on year to 23,600. Statistics Korea said Korean society is aging faster and that this is causing the figure to grow.

Meanwhile, the government has projected Korea’s fertility rate will continue to remain low and that the population is likely to start declining from 2031 and the total population will slide into 1990s levels after 2065. The statistics agency said the population will fall to half of what it is right now in 100 years if current trends remain unchanged.