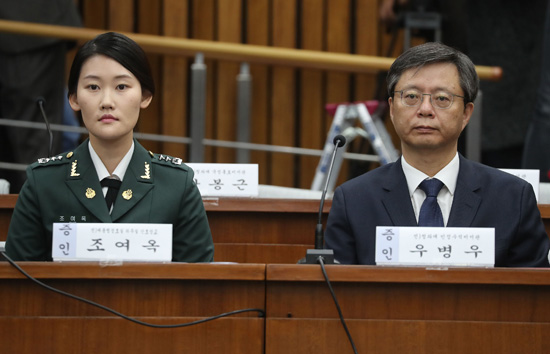 Facing a series of condemning questions and mockery from lawmakers from both sides of the aisle, Woo Byung-woo, former senior presidential secretary for civil affairs, denied Thursday any wrongdoing in the unprecedented abuse of power scandal that led to the impeachment of President Park Geun-hye.

Woo made his first public appearance in 47 days to attend a hearing by the parliamentary special committee into the Choi Soon-sil scandal, and his presence generated high media and public interest, reflecting rampant suspicions that the former prosecutor colluded with Choi and her circle to allow her to pull strings from behind the scenes in state affairs.

Woo’s position as civil affairs senior secretary empowered him to monitor any legal or ethical breach by public officials. He refuted all allegations against him, a response that drew ridicule from lawmakers.

“I do not personally know Choi,” Woo testified. “I first heard about her when media reports came out on her husband Chung Yoon-hoi [in November 2014].”

When asked if he refuted media reports that he had let Choi interfere in state affairs and colluded with President Park’s three most trusted aides, nicknamed “the three doorknobs,” he said, “I do.”

Aside from allegations that Woo turned a blind eye to Choi’s interference, he is also accused of tax evasion and embezzlement from a real estate company run by his family. He is also suspected to have obstructed an investigation into the sinking of the Sewol ferry in 2014 that left 304 dead by ordering prosecutors to not raid offices of the Coast Guard in a probe of the botched rescue efforts.

Woo denied all allegations during Thursday’s hearing and expressed regret that he had not noticed Choi’s illegal behavior.

“I wish I had known about the many irregularities [committed by Choi] and acted to prevent them from happening,” he said. But Woo denied dereliction of his duty as the senior secretary for civil affairs, which would subject him to legal punishment if found guilty.

Woo vanished from public sight and the media assumed he was dodging testifying at the Assembly hearings. At one point, former and current lawmakers offered a bounty of up to $15,000 for anyone who could find him.

A stone-faced Woo refuted criticism that he had disappeared to avoid testifying. The special investigative committee sent him a notification to attend a hearing on Dec. 7 but it didn’t reach Woo. He said he had gone outside Seoul because reporters were camping out at his house in Seoul.

For his consistent denials of all allegations against him, Woo was assailed by the special committee members, with one lawmaker going so far as to call him a “devil.”

“You are no different from a devil who abetted the undue meddling in state affairs by Choi and only went after your personal interests by having power over the military, police and the prosecution,” said Rep. Chang Je-won.

Chang said Woo had used his power to keep public officials in check to get rid of people who posed a threat to Park’s “doorknob” aides, all of whom are suspected of involvement in the Choi scandal. The three doorknobs are Lee Jae-man, Ahn Bong-geun and Jeong Ho-seong, who served President Park for 18 years from 1998 until they left the Blue House in October in the aftermath of the Choi scandal. The three were said to have been recommended by Choi to Park in 1998 when she was first elected a lawmaker.

Woo, who has a reputation for arrogance, was also reprimanded for the way he was answering questions by the lawmakers and tasted a bit of humiliation when he was told by committee chairman Kim Sung-tae to “sit straight.”

When asked if he still respected the president, Woo said he did, citing his experience of working for her. “I believed in her sincerity for the good of the country,” he said.

Rep. An Min-suk scoffed at Woo’s denial of a relationship with Choi, saying it was a “blatant lie” and a deliberate distancing of himself from Choi in an attempt to avoid criminal punishment.

“His denial of any knowledge of Choi Soon-sil, who intervened in state affairs by appointing her associates to high government positions and misappropriating state budgets, illustrates his incompetence [as the senior presidential secretary for civil affairs]. And that is what he intends to project to avoid legal trouble,” Rep. An told reporters during a break.

On suspicions that President Park underwent some form of cosmetic treatment during the first seven hours of the sinking of the Sewol ferry in 2014 and failed to properly respond to the crisis, Cho denied giving any injections to the president on that fateful day. Cho said she had never given injections to Park’s face or neck during her service at the Blue House.

But she did acknowledge giving placenta injections to some 10 presidential officials, including Park. “I gave (placenta) injections as long as there were prescriptions.”

Cho, who attended the hearing in military uniform, also denied she had administered the psychotropic drug propofol to the president, saying the Blue House does not keep the anesthetic and amnesiac drug. Propofol is commonly used for cosmetic surgery procedures in Korea. She declined to answer whether she had provided Park with sleeping pills, citing the private nature of the matter.

Meanwhile, committee chairman Kim Sung-tae said he would ask an independent counsel looking into the Choi scandal to investigate allegations that Rep. Yi Wan-young of the Saenuri Party, one of the 18 committee members, ordered witnesses to commit perjury at the hearing.

Yi is accused of having proposed former K-Sports Foundation director Jeong Dong-chun to coordinate testimonies that the broadcaster JTBC had stolen a tablet PC that contained presidential speeches and classified documents and that it was owned by Ko Young-tae, not Choi Soon-sil.

On Thursday, only two of the 12 people summoned appeared.