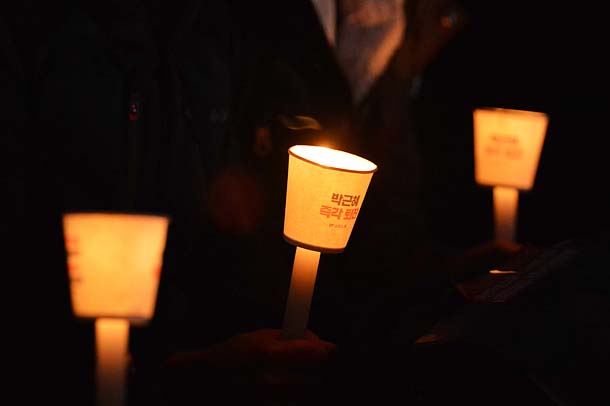 We need not wail as if our nation is done. It was shocking and demoralizing to discover what occurred in the shadows of our government.

But it was better to learn about the cancer before it spread — and when it could still be excised. Since we have become fully aware of the rot, we must hope for a way to repair flaws in our system.

We all know the fundamental problem. Lack of transparency is the root of our society’s biggest problems. Management guru Peter Drucker said, “If you can’t measure it, you can’t improve it, and what gets measured gets improved.” The power abuse scandal involving the president and her inner circle and shady closed-door meetings and deals with companies underscored how dubiously shrouded our society — both the public and private sectors — has been. We have not addressed this a problem because it was kept hidden.

The scandal serve as a wake-up call to our society’s customary and habitual oversight on transparency. Questionable practices could happen again, but we hope they would at least would lessen. In all places — the presidential office, administration, legislature, companies — decision-making must be done in a transparent manner. We will have gained more than we lost if we turn the current turmoil into momentum to reinforce and institutionalize transparency in our society. From disgrace could come salvation.

Secondly, we must be less inward-oriented. We must do away with collective selfishness and disregard for others. When a new group gains force, the achievements of another are dismissed regardless of their essence. Such a practice is deeply rooted in both the government and the corporate sector. The incumbent government killed the signature “green” agenda of the previous administration. The “creativity” slogan of the incumbent government is also set to go down the drain. Despite the questionable proceedings and flaws in the process, the basic concept and endeavors should not be completely tossed away.

Many have worked hard on projects related to an initiative. If their toil is disregarded every time, the society will have to go back to the starting point ad infinitum. There is no sustainability in such a society.

In spite of the disgraceful scandal, our society has good reason to be proud. The maturity of our society has gained international recognition. We have become a society of envy. The foreign press was impressed by the way Koreans rallied in a perfectly peacefully manner to dethrone the disgraced president. Over the summer, a Korean-American wrote on social media that he was awed by the changes he discovered in his mother country after his first visit in decades. Despite his comfortable life in the United States, he felt as if he had gone back in time when he returned home after experiencing the efficacy of Korean society. Michael Breen, who was a correspondent in Korea for a long time, makes similar remarks in his book “The Koreans: Who They Are, What They Want, Where Their Future Lies.” He discovered that Koreans were exceptional in many ways, but they themselves were unaware of it.

Our society is prone to be critical about ourselves. Our flaws should not let us down. Mark Twain said, “When people do not respect us, we are sharply offended; yet deep down in his private heart no man respects himself.” There is a clear difference when something is done with self-esteem and when not. We will never improve our society with self-flagellating nicknames like “Hell Joseon,” a modern version of a hierarchical feudal society. Self-esteem is what we all need to get our society back together.

In his book “Howard’s Gift,” Eric Sinoway writes about the teachings of his Harvard Business School professor Howard Stevenson. He quoted the professor on “inflection points” in people’s lives, which are “a moment in time when the structures are removed and the rules are suspend, a moment in which we need to reflect inwardly about what we want, and then act to redefine the situation in such a way as to help us accomplish it.” If we can figure out what we want and act to prove our capabilities, our future is bright.

If we can use the messy and shameful scandal to strengthen transparency in our society, become more open-minded, and be more confident in ourselves, our society would find itself making big strides toward becoming an advanced and mature society. And I am sure we would end up there eventually — possibly sooner rather than later.