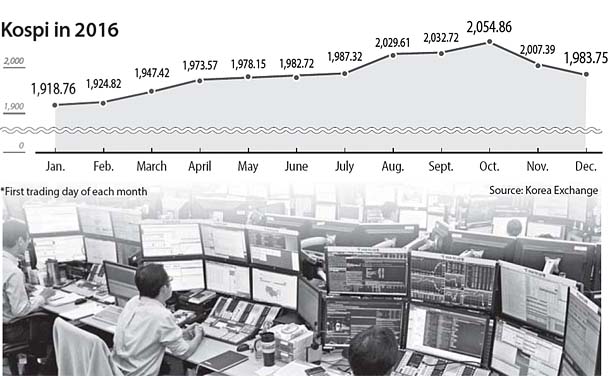 Korea’s main stock index had the lowest volatility among the major economic players worldwide, living up to speculation that the main Korean market will once again turn out to be the “boxpi” - a portmanteau of “boxed in” and Kospi - because stocks have not fallen or risen past a certain level for some time.

The benchmark Kospi’s monthly return volatility for 2016 was 1.9 percent, the lowest of 17 major economies around the globe, according to the report by Korea Exchange and Shinhan Investment Corp. Shinhan said in a report issued on Thursday that big events, including Brexit, Samsung Electronics’ Galaxy Note7 recall and Donald Trump’s presidential victory kept Kospi below 2,100. The difference between the high and low points was about 200 points, between 1,800 and 2,000, matching the average since 2011.

“It’s been like this for the past five years,” said Chang You-jin, a researcher from Shinhan Investment. “It’s a double-edged sword. It means the index neither rose nor fell significantly. Notwithstanding, the moderate movement shows the earnings rate remained low, signifying there was a limit to how much investors were able to earn, making the Korean stock market look dull.”

But Shinhan reported some positive aspects of 2016. For one, large-cap shares struck back in 2016, outperforming mid- and small-cap shares, which have risen for three years to outmatch the large-cap shares. In comparison to Kospi, large-cap shares added 2.5 percentage points this year, also rising 13.6 and 6.4 percentage points compared to mid- and small-cap share each. Another notable market trend in 2016 that gives a positive outlook for next year is the return of foreign investors. For the first time in four years, the foreign capital that flooded into the Korean market exceeded 10 trillion won ($8.3 billion).

“Regardless of Kospi’s movement next year, we speculate that foreigners will continue to buy. Sectors such as information technology, materials and industrial materials will outperform others. We project these sectors will post a lucrative profit margin next year,” said Chang.

She said that if Trump administration pushes forward with protectionist trade policy next year, then to sell U.S products and boost exports overseas, the dollar must remain weak. When the dollar is weak, capital tends to flow into emerging economies, including Korea’s.

“There are ways to overcome the current market momentum. Along with the influx of foreign capital due to the weak dollar and improved performance of certain sectors, the Korean market will look attractive next year.”