Dan Myeong-hak, 55, has cultivated orchids for more than 30 years in Yangju, Gyeonggi. He sighs whenever he sees the 3,970-square-meter (0.98-acre) greenhouse. November and December are usually peak seasons for orchid farms, as public and private companies in Korea make human resources decisions during that period. Orchids have traditionally been the most popular item to celebrate promotions. But it seems the usual won’t apply this year due to the Kim Young-ran Act that went into effect in September.

“Orchid prices were cut in half after the law enacted, but wholesale merchants still aren’t buying,” he said.

A 45-year-old man surnamed Kim who works at a public office in Seoul was promoted to team leader this month. The task that has kept him occupied since then was returning orchids delivered as celebration gifts. “The law says that gifts under 100,000 won ($83) are fine, but I don’t feel comfortable keeping them and the company doesn’t seem too keen either,” he said. “I’ve already told close acquaintances not to send them.”

Orchid farmers and merchants are expressing deep concerns as the market rapidly shrinks in the aftermath of the so-called antigraft law. Sales saw a steep decline after flowers were included in the list of congratulatory gifts limited to 100,000 won. The orchid auctions - the main channel farmers sell products to wholesale dealers - were immediately hit. On Dec. 14, Korea Agro-Fisheries & Food Trade Corporation (aT) said it would reduce orchid auctions from twice to once a week. 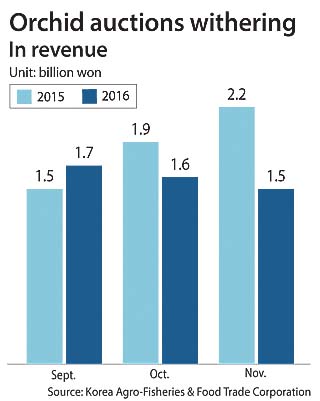 The number of orchids sold at auctions saw a steep fall: From Sept. 28 to last month, 40,000 pots were sold during Thursday’s auctions, down 51 percent from last year. The average price per pot declined from 5,081 won to 3,346 won. The real problem is that the decrease in sales is not a temporary one, but the start of a longer depression in the market. “About 85 percent of sales for orchids are gift purposes, so the new law’s effect on the market is expected to last longer compared to other flowers,” said Noh Yoon-hee, a director at aT.

The market structure is weak as well. Until the mid-1990s, a majority of orchids sold in the market were labeled premium, priced between 100,000 won and 500,000 won. The first downfall came in 1997 with the IMF crisis when the economy suddenly collapsed and layoffs were more frequent than promotion.

This dark age shifted the orchid market’s main stream to lower priced products. Even today, the most popular type of orchid that takes up 80 percent of the market is the “Cymbidium gyokuchin Makino,” sold for below 50,000 won. “We somehow managed to survive the IMF on zero margins, but today’s situation is even more fearful,” said Dan. “The weakening of consumer sentiment during the IMF was a natural phenomenon that came with the depressed economy, so we only had to wait for it to get better; it’s different this time because people are not afraid of spending, but the law itself.”

What the orchid industry fears most is the possibility of reduced sales prompting a chain of bankruptcies in the market. “Unlike other flowers, orchids take two to three years to cultivate and if they are not sold at the right time, they die, so we can’t keep them in piles like industrial goods,” said Kim Hee-jong who runs an orchid farm in Seongnam, Gyeonggi Province.

If orchids don’t sell, the only option left for farmers is to reduce their cultivation area. “As orchids take a long time to grow, their supply is not flexible to market demand so if sales continue to be sluggish, the whole market will break apart,” said Professor Kim Ki-sun of Floriculture & Landscape Plants at Seoul National University. “If domestic suppliers for high-class orchids collapse, we might have to depend on imported orchids from China and South America, which would ultimately push up prices.”

While industry insiders and academics agree to the Kim Young-ran act’s cause to eradicate bribing and corrupt practices, they point out the necessity of institutional support for the blown flower market. “The government should set a clear set of legal guideline and limits regarding flower gifts,” said Lee. “Japan’s law for the floral industry is a good benchmarking case.”

Established in 2014, the law established quality certification, modernization of the retail system and enforced education to stabilize the flower and plants industry.