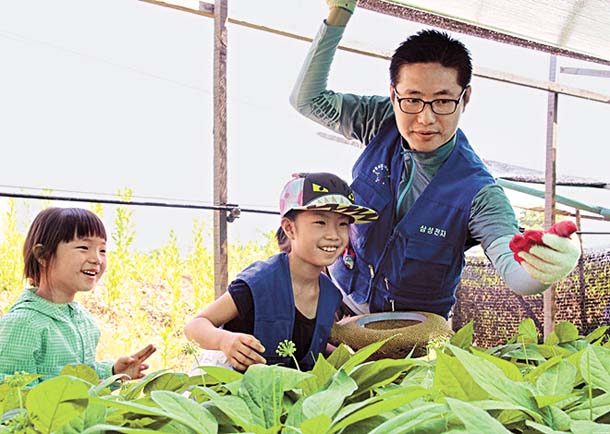 Employees and their families visit Bidulginang in Pocheon, Gyeonggi, and participate in the special volunteer programs held in the town. [SAMSUNG ELECTRONICS]

Employees of Samsung Electronics, along with local citizens, participated in a number of volunteer projects during the 2016 Samsung Global Volunteer Festival.

As part of the festival, the company participates in the Health, Walk, Share Campaign at Samsung Digital City in Suwon, Gyeonggi.

Employees measure the number of flights of stairs they walked up and down using an app called ‘Walk up the Flights and Share.’ Using the app, they donate 10 won per floor, and the company matches that amount.

When employees are out on a walk, they can check their employee card, which will automatically donate 1,000 won on their behalf. Donations are given to disadvantaged employees of affiliate firms based in Samsung Digital City.

Also, employees of Samsung Electronics and their family members visited rural cities such as Bidulginang in Pocheon, Gyeonggi; Leegok in Suncheon, South Jeolla; and Saolang in Gunsan, South Jeolla. They helped farming families during the harvest season and participated in a number of programs, contributing to reinvigorating the local economy.