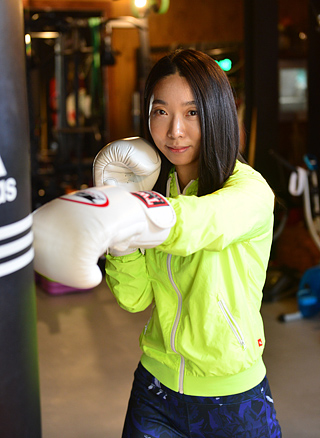 Jang Eun-ha, the founder of CTOC, says she wants to create a society where the mind can be cured not by medicine but by martial arts training. [WOO SANG-JO]

When the JoongAng Ilbo visited the headquarters of CTOC near Seoul Forest, Seongdong District, eastern Seoul on Dec. 8, it looked very much like a martial arts studio.

The floor was covered with mats and various types of equipment was visible including boxing bags. On the walls were pictures of Bruce Lee and legendary boxer Muhammad Ali.

“Here, you can learn 11 different martial arts, ranging from a rather static t’ai chi ch’uan to kickboxing and Muay Thai, which requires faster movements, depending on your preference,” Jang said. “The instructors working here are masters of four to five different types of martial arts and some have trained over 20 years.”

Jang used to be an office worker at a conglomerate and was “far from exercising everyday.” About three years ago, she went through a battle with mental illness.

“I was stressed and one day I found out that I was depressed. When I went for a regular health checkup, the doctor told me my physical shape was not very good either. I knew I couldn’t go on like that. So from then, I started training myself with kickboxing and Muay Thai at a gym in the mornings.”

After a year of training, her body was in much better shape. “My mindset was totally different as well,” Jang added. “I wanted to tell other people that depression can be overcome even without the help of medicine.”

Jang quit her job last June, rented a house and remodeled it into a martial arts studio. A few people came out of curiosity, and now there are over 50 members.

“From company executives to celebrities, those who get heavy stress from work visit our studio,” Jang said.

“I taught martial arts for eight weeks to five people who were being treated for mental diseases and it was effective,” Jang said. One of the most memorable was a university student suffering from schizophrenia.

“The student was on a leave after failing to adapt to the university environment, but after completing the martial arts program we offer, the student was able to get back to university.” Six months have passed but the student still comes to the CTOC studio every week for exercise.

From next year, Jang plans to teach martial arts for free to job applicants who receive youth benefits from the Seoul City Government, which means they are from families with modest means.

“Martial arts is the best self-improvement program and anyone can discover their talents through training,” Jang said. “I want to create a society where people can cure their minds not with medicine but through healthier treatments.”