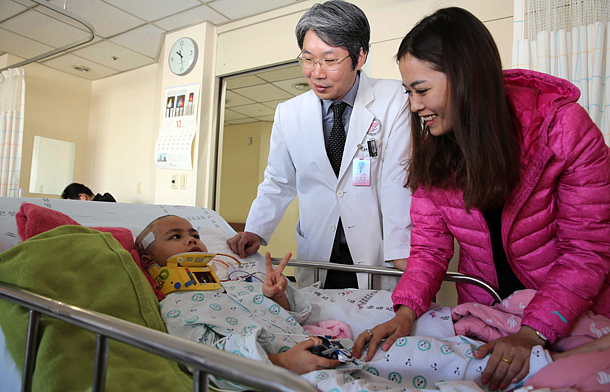 On the afternoon of Dec. 15, in a patient’s room in the Hallym University Sacred Heart Hospital at Anyang, Gyeonggi, head nurse Yun Geum-seon approached a 4-year old boy who was clutching a toy car in his bed. When she presented a toy snowman as a gift, the child smiled, hugged it and replied back “cam on,” or thank you in Vietnamese.

The child’s name is Kieu Giaybac. In September, merely a hundred days ago, he was with his family when their car was hit by a trailer at Bac Giang in the vicinity of Hanoi. The child was not wearing a seat belt and suffered a severe neck injury, though there was no nerve nor bone damage.

But doctors at Hanoi’s Viet Duc University Hospital were reluctant to perform surgery, as any complication could have led to general paralysis. Because of this, the boy lay in bed for two months wearing a special laurel-wreath-shaped brace. Had he been left in that, he would have spent his entire life gazing at the ground.

But a doctor at the Viet Duc Hospital had an idea. The individual recollected Kim Seok-woo, professor of Orthopedics at Hallym University Sacred Heart Hospital, who had instructed the doctor previously. According to Hallym University, Kim was the first foreign doctor to be decorated by the National Order of Vietnam last year and held exchanges with Vietnamese doctors over the past decade.

Knowing not any English, the mother, Hoang Tidao, 30, received help from her younger brother and her doctor and sent an email to Kim on Nov. 13. “To get the best results,” she wrote, “I want to receive treatment in Korea. If this is possible, please reply.”

They corresponded through email ten times to fine tune the surgery schedule. “The mother’s letter was laden with urgency, line after line,” said Kim. “At the words, ‘it would be great if you could please perform the surgery,’ I immediately asked them to come to Korea.”

Hoang prepared the medical costs and airfare with help from her family and friends. There was one last obstacle. Their visas were rejected twice due to concerns of illegal immigration and the surgery date was pushed back. In the end, with the help of Kim, the visa was sent and they received their visa for the duration of Dec. 10-15.

“Thank you for your strong support,” she wrote. “I hope my child recovers quickly.”

The mother and her son arrived at Incheon International Airport on Dec. 11. Kieu was transported to Hallym University Sacred Heart Hospital by ambulance and underwent surgery for over six hours on Dec. 17. Kieu was moved to the recovery room after the surgery, where they both wept - the child because it hurt, his mother out of joy that her child was well.

“I’m just so happy,” she said while touching her son’s face as if in disbelief. “It feels as if all my pain has been washed away.”