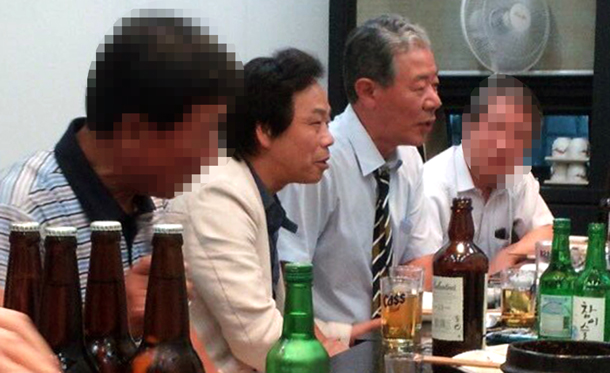 Rep. Yi Wan-young of the Saenuri Party, second from left, who is a member of the special parliamentary committee investigating the so-called Choi-gate scandal, is seen having drinks with Lee Kyung-jae, second from right, a defense counsel for Choi Soon-sil in a photo taken in 2013. [YONHAP]

A ruling Saenuri Party lawmaker accused of pressuring key witnesses to commit perjury at a parliamentary committee hearing was found to have a personal relationship with the lawyer of Choi Soon-sil, the controversial friend of President Park Geun-hye.

During a hearing on Thursday, Rep. Park Young-sun of the Minjoo Party disclosed a photo taken three years ago that shows two-term lawmaker Yi Wan-young with lawyer Lee Kyung-jae, who has been representing Choi, 60, since she returned to Korea from Germany in late October.

In the photo, Rep. Yi is seen having a meal and drinks with Lee at a restaurant.

The photo can only deepen suspicions that Yi is taking part in the hearing investigating Choi’s meddling in state affairs on behalf of her defense team. The lawmaker is also suspected of ordering former K-Sports director Jeong Dong-chun, a key associate of Choi, to falsely testify at the hearing that broadcaster JTBC stole a tablet PC that contained classified information and presidential speeches with signs of Choi having edited them.

Showing the picture of Yi and Kim at the hearing Thursday, Rep. Park said, “This is the proof that Yi has been representing Choi all along during the course of the hearings.”

Trying to find a way out of the accusation, the two-term lawmaker said Friday he had known Kim because Kim is the vice-chairman of the hometown association of Goryeong County in North Gyeongsang, which he represents.

“It is only natural that I meet with people of the hometown association as I represent Goryeong County,” explained Yi during a press briefing Friday.

Yi said he had never met Kim after he was hired by Choi.

The parliamentary committee investigating the scandal that led to the impeachment of President Park already requested an independent counsel separately probing the scandal to look into allegations that Yi had encouraged perjury.

Yi is known as a loyalist of President Park and his repeated questioning of Choi’s ownership of the tablet PC in the hearings - crucial evidence of Choi pulling strings from behind the scenes - tried to undermine the validity of the JTBC’s exclusive report on the device. Amid growing questions about Yi’s conduct, lawmakers from both sides of the aisle demanded committee chairman Rep. Kim Sung-tae remove Yi from the 18-member panel. Yi served as the Saenuri’s chief panelist.

In Myung-jin, who was nominated by Saenuri floor leader Chung Woo-taik on Friday as the party’s acting chief, said he would remove Yi from the committee and refer him to the party’s ethics committee. “He needs to take responsibility for his misdeed,” said the pastor, who is expected to take control of the Saenuri pending consent from party members at a national meeting.