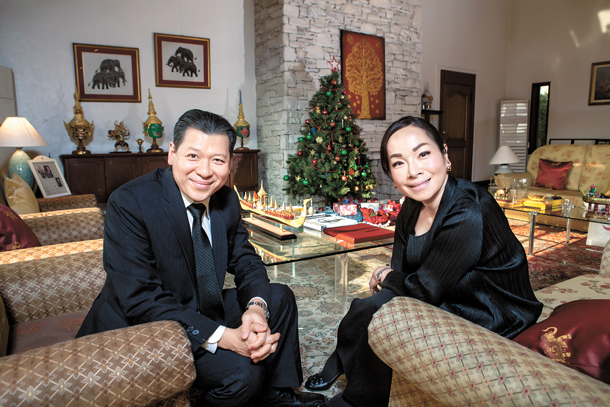 
When describing his first impression of Korea, Thai Ambassador Sarun Charoensuwan, who was appointed in January of this year, often relies on a personal anecdote he and his wife experienced one day. They were returning home when they found a mysterious box lying on their doorstep.

In it was a wallet. An ID card showed it belonged to a Thai national.

“I think it was sent by the local police,” recalls Charoensuwan, adding, “apparently the guy dropped it somewhere.” The most shocking part, he said, was that nothing seemed to have been lost because credit cards and cash were left inside.

“It’s really incredible how safe this country is. I tell this story to all the Thai guests we host at our residence.” For the past 12 months, during his first year serving as ambassador, the Thai diplomat managed to organize over 80 functions at his residence.

A. The residence of the Thai ambassador is nestled in Itaewon-dong, central Seoul. It’s a two-story house about 584 square meters (6,286 square feet) large. On the first floor, there’s a spacious living room with a high ceiling that looks out a garden, a kitchen, a bedroom, and a dining room big enough to accommodate up to 20 guests. There are three bedrooms on the second floor, too.

The neighborhood is quiet, safe and clean. Namsan Park is less than 10 minutes away on foot. Ambassadors of many countries live nearby, including Morocco, Peru, India and Cote d’Ivoire.

What we like most about this house is its high ceiling, the persimmon trees in the garden, and proximity to the Namsan Park and Itaewon Station, which makes it convenient for us to travel by public transportation during the weekends. In our free time, we walk to the park. We very much enjoy living in this residence as it feels very homey and cozy. We also like that the residence is situated on a hill and far from the main roads, which environment guarantees fresh air.

The residence is owned by the Royal Thai Government, purchased in 1985 at an approximate price of 1 billion won ($842,000) at that time. Over the past three decades, 12 Thai ambassadors, including myself, have lived here. My wife and I moved in January, when my term officially began.

We’re very fond of the picture of the Bodhi Tree in the living room, the tree under which Lord Buddha attained enlightenment. The tree is easily recognized by its heart-shaped leaves.

Although nearly 90 percent of the Thai population is Buddhist, including us, Buddhism isn’t our official religion. We believe that all religions are equal, whether that’s Christianity or Islam.

What other Thai traditions do you have here?

At a corner of our living room, we have bust sculptures of characters from Ramakien, Thailand’s national epic derived from Ramayana, the holy revered text of Hindus. They each represent a character in the ancient tales. Above them are paintings of our national animal, the elephant, which usually symbolizes strength and longevity, among other virtues.

Near our entrance, as like any other household in Thailand, we also have portraits of Their Majesties King and Queen. Thais are currently mourning the passing of the late King Bhumibol Adulyadej, who passed away on Oct. 13 at the age of 89. His Majesty King Maha Vajiralongkorn Bodindradebayavarangkun ascended the throne on Dec. 1. 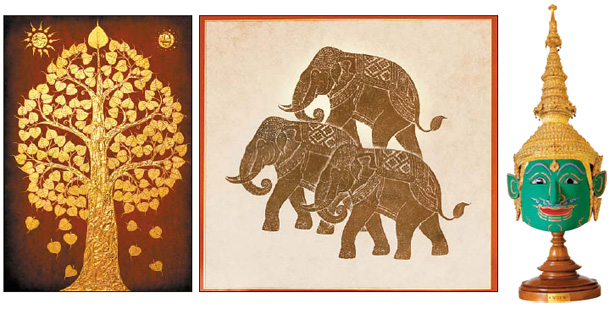 From left: An art piece of the symbolic Bodhi Tree; Elephants, the national animal of Thailand, adorn the walls of the house; A bust sculpture of a character from Ramakien, Thailand’s national epic derived from Ramayana, the holy revered text of Hindus.[PARK SANG-MOON]

What’s the largest reception you ever held?

I regularly host lunch and dinner for Thai and foreign guests in the residence, as it is a good way to demonstrate the renowned Thai hospitality and cuisine. Since January, I’ve held over 80 events, with the number of guests at each function varying from 10 to over 50.

The largest event ever taken here this year was on Dec. 13 when we had a delegation of around 70 people from Thailand. The dining room and living room weren’t big enough to make our guests feel comfortable, so we had to set up a heated tent in the garden for extra space.

What does a typical house in Thailand look like and how can you compare it with Korean houses?

Traditionally, Thai houses are made out of wood, raised on stilts and topped with a steep gabled roof. However, it’s more common nowadays to find concrete houses that are built in a more modern, western style. In the metropolitan areas, people prefer living in condominiums that are near to public transit like the subway or sky train.

One common feature you will notice in Thai houses is portraits of the royal family members, particularly Their Majesties the King and Queen, who are well-loved by all Thai people. Thai houses don’t have floor heating systems like in Korea as the weather in Thailand is warm throughout the year. Instead, air conditioners and electric fans are used all year round to help residents beat the hot weather.

How do your countrymen treat visitors to their homes?

Visitors to Thai homes are greeted warmly by the host. One of the first things offered to a guest once they settle down is a glass of cold water. I think this has become customary due to the hot weather of Thailand. Like in Korea, visitors to Thai homes usually take their shoes off before stepping into the house.

The Korean people are very nice and friendly, and are always eager to help us. I was fortunate to have the opportunity to travel to many places in Korea such as Busan, Ulsan, Jeju Island, Iksan in North Jeolla, Gyeongju in North Gyeongsang and Chungju in North Chungcheong.

We still have many more places to visit, but so far, we find Jeju to be one of the most beautiful destinations in this country, and look forward to going back soon in the future.

For some of our readers interested in visiting Thailand, do you have any personal travel tips?

Thailand is definitely worth a visit. Traditionally renowned for memorable and adventurous travel experiences, the country has grown to be capable of providing all that a traveler would possibly need. It offers everything that suits Koreans’ tastes, including authentic Thai food, wonderful shopping districts, stunning golf courses and soothing spas.

Must-see tourist attractions are scattered across the country, from the world-class beaches in the south to the scenic mountain tops in the north. Each region is different and has its own distinctive charm. If you have enough time, I recommend visiting as many regions as possible in order to learn about the different cultures and enjoy great diversity, amazing landscapes and outstanding historical sites.

If you’re on a short-term visit, I recommend a walk in Koh Rattanakosin, better known as Bangkok Old City, where visitors can find palaces, temples and ancient architecture. It’s filled with a peaceful and slow-paced vibe, somewhat like in the 19th century. Visitors can enjoy a classic view of local communities along the Chao Phraya River, visit museums and art galleries, and try traditional Thai street food and famous desserts.

For souvenirs, drop by the Chatuchak Weekend Market, the largest market in Bangkok, where there are endless lines of merchandise, including clothes, accessories, ceramics, handicrafts, drawings, antiques and collectibles.

What sets Thailand apart from the rest of the world?

The smile - almost everywhere you go in Thailand, you’ll see people smiling at each other regardless of whether they know each other. Thailand is known as the “Land of Smiles.” Foreigners are very much welcome in Thailand, perhaps partly because Thailand has never been colonized by any other nation.

[At Home with Her Excellency