All protesters wanted for Christmas is impeachment

All protesters wanted for Christmas is impeachment 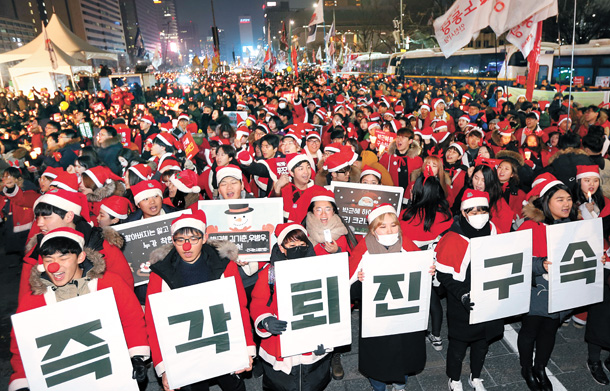 Christmas Eve did not stop hundreds of thousands of people from taking to the streets to demand President Park Geun-hye step down or, failing that, that the Constitutional Court deliver swift judgment on Park’s impeachment and remove her.

Park was impeached by the National Assembly earlier this month over alleged violations of the Constitution and criminal laws in letting longtime friend Choi Soon-sil wield unprecedented power in state affairs even though she held no official position in the government. It also accused her of malfeasance in the reaction to the sinking of the Sewol ferry in 2014.

As many as 700,000 gathered throughout the country on Christmas Eve, according to rally organizers. Police estimated some 53,000 did.

Some 550,000 gathered in Gwanghwamun Square alone to demand Park’s immediate departure from office, according to rally organizers.

“Dashing through the lights, my pickets held on high, o’er the streets we go, laughing all the way; If the candles win, making Park step down, what fun it is to ride and sing a rally song tonight.”

Protesters marched toward the Blue House, the Prime Minister’s Office and the Constitutional Court, keeping 100 meters (328 feet) away from each location as required by police.

“Christmas will be merry again only if Park is put behind bars,” protesters chanted in Busan as they marched on Jungang Main Street of Seo-myeon on Saturday evening. Organizers said some 70,000 gathered, while police put the number at 6,000.

Various performances were prepared for the Busan rally, including the placing of people behind bars wearing masks of Park, Prime Minister and acting president Hwang Kyo-ahn, former senior presidential secretary for civil affairs Woo Byung-woo and former Blue House presidential chief of staff Kim Ki-choon - all accused of power abuse and involvement in the Choi-gate scandal. A mock trial sentenced Park to imprisonment for life.

Park was named an accomplice in the indictment of Choi, but she can’t be prosecuted while president.

Protesters in Busan held pickets that read “Punish the accomplice” and “Judge now” but didn’t forget their holiday spirits. As they marched, many were clad in jolly red Santa Claus outfits, including hats and beards.

“I brought my son to the rally because I heard it’s going to be quite festive,” said Park So-young, a 43-year-old resident of Busan. “I will continue to rally until the will of the people is realized.”

The streets of Daegu, Park’s hometown, were also crowded with some 2,000 protesters in a candlelight vigil to demand Park step down. Protesters held pickets that read “Disband the Saenuri Party” and “Constitutional Court must impeach Park immediately.”

“The passage of the parliamentary motion to impeach Park is only the beginning,” said Seong Yoon-chae, a 28-year-old resident of Mungyeong, North Gyeonsang. “Now is the chance for the Korean people to build anew their society.”

A protester dressed as Darth Vader from the film “Star Wars” stood out from the crowd.

Self-proclaimed Park supporters held their own rallies throughout the country on Saturday as well. Some 1,000 people, according to police, gathered in Daegu on Saturday to demand the Constitutional Court nullify Park’s impeachment motion.

A group of Park supporters also gathered in Seoul. Rally organizers said some 100,000 gathered, while police said only 15,000 did.