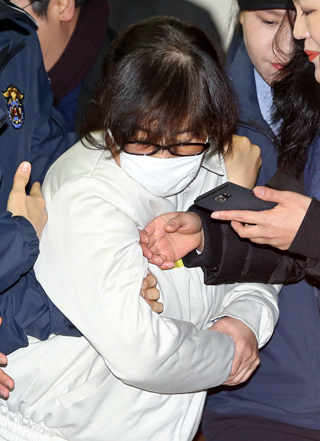 Choi Soon-sil is taken before the independent counsel team in Daechi-dong, southern Seoul, for questioning on Saturday. [YONHAP]

After summoning presidential friend Choi Soon-sil on Saturday and questioning her on bribery allegations, the independent counsel may be trying to charge President Park Geun-hye with third-party bribery, punishable by criminal law.

The counsel questioned Choi on charges of power abuse, attempted coercion and attempted fraud, and also questioned her about alleged bribery. Choi was indicted in November on charges of coercing conglomerates to make massive donations to foundations in collusion with President Park.

“As much as Choi is denying all charges against her,” said an official of the independent counsel, “the counsel is going all out on trying to secure all evidence against her.”

During a press briefing Saturday, Lee Kyu-chul, spokesman for the independent counsel said, “There are additional charges for Choi that we need to confirm through the questioning, and that includes bribery allegations.”

Legal analysts interpreted Lee’s statement to mean that the counsel may try to charge Park, who was named an accomplice in Choi’s indictment, with third-party bribery. She cannot be prosecuted as president but can after she leaves office.

The independent counsel suspects that Park, in exerting undue influence over the National Pension Service’s approval of a deal to merge Samsung C&T and Cheil Industries, forced Samsung Group to make hefty donations to two nonprofit foundations controlled by Choi.

The $8 billion merger was part of a generational leadership shift in the Samsung Group and strengthened heir apparent Lee Jae-yong’s grip on Samsung Electronics.

Samsung Electronics was a generous supporter of Choi’s daughter Chung Yoo-ra, an equestrian athlete. It pledged 22 billion won ($18.4 million) for her training. It also signed a contract with a company created by Choi in Germany and paid it about 8 billion won.

Samsung Group was also the largest benefactor of the two nonprofit foundations that Choi practically controlled. It contributed 20.4 billion won.

Determining whether the money Samsung gave to Choi was a bribe is the top priority of investigators at the independent counsel.

Third-party bribery is a punishable crime in Korea’s Criminal Act. “A public official or an arbitrator who causes, demands or promises a bribe to be given to a third party on acceptance of an unjust solicitation in connection with his duties shall be punished by imprisonment for not more than five years or suspension of qualifications for not more than ten years,” article 130 of the act says.

Arriving at a district prosecutors’ office in Daechi-dong, southern Seoul, around 1:50 p.m. on Saturday, Choi did not respond to reporters’ questions as she entered the office.

Former Vice Minister of Culture, Sports and Tourism Kim Chong was also summoned by the counsel Saturday. Kim is accused of having pressured conglomerates to donate large sums of money to the two foundations linked to Choi. He is also suspected to have pressured Samsung and other conglomerates to fund Chung’s training.

Kim was summoned once more on Sunday, when the counsel also questioned Jeong Ho-seong, Park’s former personal secretary for 18 years, who is accused of leaking state secrets to Choi.

Meanwhile, the parliamentary investigators into the Choi-gate scandal are to visit Choi’s detention center in Uiwang, Gyeonggi, today to question her and presidential aides including Jeong and former senior secretary for policy coordination An Chong-bum.