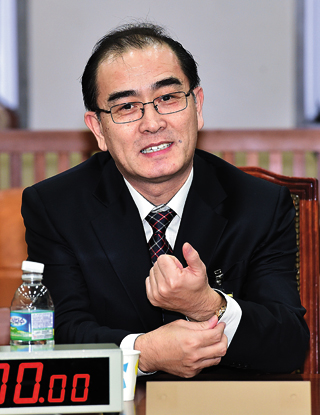 Thae Yong-ho, former No. 2 official at the North Korean embassy in London, testifies before the Intelligence Committee of the National Assembly Friday afternoon. He is the most senior North Korean diplomat to ever defect. [KANG JUNG-HYUN]

North Korea is planning to conduct another nuclear test around South Korea’s presidential election next year, a high-profile North Korean defector has said, in the latest sign that Pyongyang would not abandon its nuclear program despite growing international pressure.

Thae Yong-ho, a former No. 2 official at the North Korean embassy in London, said North Korea’s foreign ministry has sent documents to its overseas missions that Pyongyang is seeking to carry out its sixth and seventh nuclear test by next year.

“In particular, it calls for preparations as North Korea would seek to conduct a nuclear test around the presidential election,” Thae said Friday in a closed-door parliamentary intelligence committee session, according to lawmakers. It marked Thae’s first public appearance since his defection to South Korea in July.

North Korea conducted two nuclear tests this year alone following tests in 2006, 2009 and 2013. Seoul’s spy agency has said that Pyongyang is ready to carry out a sixth nuclear test at any time.

Thae’s comments illustrated Pyongyang’s commitment to keep advancing its nuclear program in defiance of growing U.N. sanctions and pressure. Thae added that the North’s leader Kim Jong-un wants his country to be recognized as a nuclear state, such as Pakistan or India, a status rejected by South Korea and the U.S.

“After being recognized as a nuclear state, North Korea hopes to resolve pending issues through international dialogue,” Thae said.

Talks on ending North Korea’s nuclear program were last held in 2008. There is no sign yet that the talks - which involve China, South and North Korea, the U.S., Japan and Russia - could resume anytime soon.

Thae said that the North sees the prime time for getting nuclear recognition in the early stages of the new U.S. administration which means late 2017 or early 2018.

South Korea is likely to hold a presidential election earlier than expected next year after parliament approved a motion on Dec. 9 to impeach Park over a corruption scandal. The Constitutional Court has up to six months to review whether to unseat or reinstate her. Park’s single five-year term ends in February 2018 with the next presidential election originally slated for December 2017.

Thae also said that North Korea hopes that Seoul may take a fresh approach toward Pyongyang under a new administration.

“Pyongyang hopes that doubts about the effectiveness of sanctions against North Korea gain traction in a short period of time. It wants South Korea to seek a new inter-Korean policy,” he was quoted as saying by a South Korean lawmaker.

Thae, a former minister at the North Korean embassy in London, is one of the highest-ranking North Korean officials to come to the South. Thae began his resettlement process in South Korea earlier in the day, after a months-long investigation by Seoul’s spy agency into reasons for his defection.

He told lawmakers Monday that he fled to South Korea due to his disillusionment with the regime. Yonhap