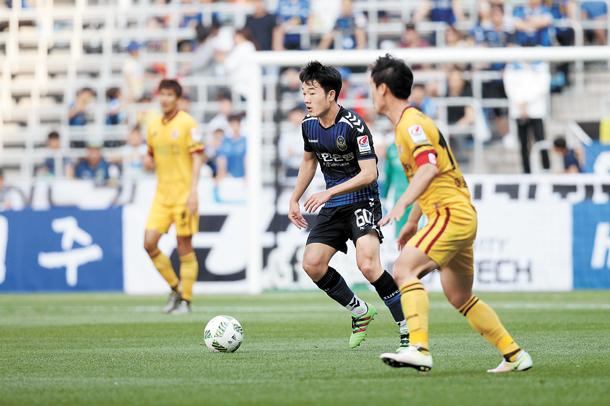 In this file photo taken on May 22, 2016, Incheon United midfielder Xuan Truong plays during a K-League Classic match between Incheon United and Gwangju FC at Incheon Football Stadium in Incheon. He will play for Gangwon FC in 2017. [K-LEAGUE]

The K-League Classic club said they have acquired Xuan Truong, who is the first Vietnamese athlete to play in the top tier South Korean football league. The 21-year-old midfielder will join Gangwon on a loan deal.

Truong signed with Incheon United FC in 2016 on loan from Hoang Anh Gia Lai (HAGL). Truong, however, played only four matches for Incheon and spent most of the season with the reserve squad. Gangwon said they will reinforce marketing activities and football exchange programs for Vietnam by signing Truong.

“Truong is a proven star footballer in Southeast Asia,” Gangwon said in a release. “We actually tried to sign him this summer, but failed to draw his interest back then because we were in the second-tier K League Challenge.”

Gangwon finished fourth in the K-League Challenge this season, but they earned their spot in the top flight K-League Classic next year after winning the promotion playoff against Seongnam FC last month.

Gangwon have signed a handful of proven assets this winter. Their key acquisitions include forward Lee Keun-ho, former Asian footballer of the year; defender Oh Beom-seok, a national team veteran; goalkeeper Lee Bum-young, a key member of the Olympic bronze medal squad in 2012; and striker Jung Jo-gook, the reigning MVP and scoring champion.

“I want to become a recognizable player in the K-League,” Truong said. “I also want to help Gangwon earn their spot in the Asian Football Confederation Champions League.”