Spanish artist Jaume Plensa’s new public art project is now on view at the Lotte World Tower in southeastern Seoul. The 8.5-meter (27.89-feet) white stainless sculpture of a human figure is created with the letters of hangul or the Korean alphabet.

At a glimpse, viewers might see just a random composition of hangul’s fragments. But after a while, they may discover some fragments make up beautiful words like sarang (love in Korean), beot (friend), and pyeonghwa (peace).

Hugging its knees, the sculpture seems to withdraw into itself but actually it invites the viewers inside - literally. The title of the sculpture is “Possibilities.”

“I [have] used the Korean alphabet several times before [for a series of sculptures that consists of different cultures’ alphabets] - but just a little,” Plensa, 61, said in an interview with the Korea JoongAng Daily at the Lotte World Tower late last month. 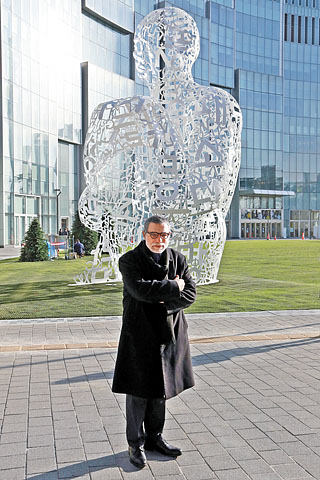 “But this time, I wanted to pay homage to the Korean alphabet,” he continued. “I love it because it is one of the most beautiful alphabets in the world. In fact, I don’t understand the text but I enjoy its shapes and the beauty of its calligraphy.

He added that the curators of the Lotte Foundation for Arts helped him choose some Korean words for “Possibilities.”

Even when a person cannot read a different culture’s alphabet, just seeing its forms and shapes help him or her understand the culture somehow, the artist said.

“An alphabet is perhaps the most beautiful portrait of a culture,” Plensa said. “When you see the calligraphy of a culture’s alphabet, you come to understand more or less the background of the culture. The Korean alphabet is one of the most precise and beautiful ones in that way.”

His opinion rings true for hangul, because the Korean alphabet was formed by King Sejong the Great (1397~1450) and scholars on the basis of East Asian philosophy, which views heaven, earth and humans as the three basic factors that make up the world.

Plensa added he became fascinated with the shapes of the text when he was a child because of his father, who was passionate about books.

The artist also emphasized the openness of the sculpture “Possibilities.”

“Although the sculpture takes [on an intimate and withdrawn] pose, it is completely open, inviting people to walk inside,” Plensa explained. “When you are [inside the sculpture] looking through the letters around you, you will have a completely different [view] of the world, just like when you look at the world while listening to certain music.

“The letters of the sculpture are just like the notes of a music piece and you can look at the world through the music of the words.”

Plensa’s major works are often sculptures of human figures including the famous series of human heads which depict young women with their eyes closed.

“I decided to continue my work on portraits [after] the Crown Fountain project in Chicago,” he said.

The Crown Fountain, which he designed for Chicago’s Millennium Park, brought the artist worldwide acclaim. Set up in 2004, the work is frequently referred to as an example of a successful public art project, which actively invites members of the community to play with the work.

The piece consists of a pool and a pair of glass brick towers whose LED displays show the faces of 1,000 different Chicagoans with fountains positioned to make it look as if the faces are spitting out water.