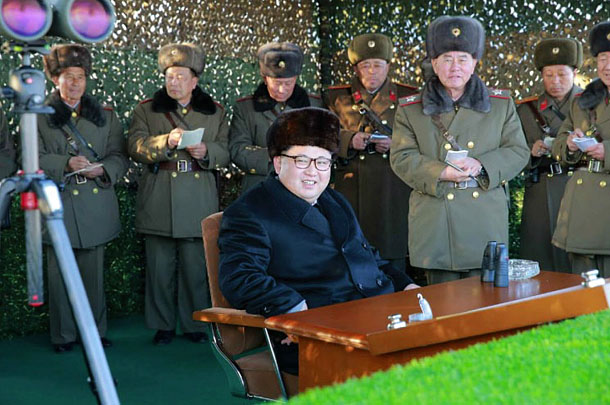 Unsettling shadows descended on the Korean Peninsula at the end of 2016. A security threat on top of domestic troubles with the president under impeachment proceedings, politics swept up in turmoil, candlelight vigils likely to stretch into next year, and depressing economic data have put the country into something like crisis mode. This is why Pyongyang’s actions are being closely watched.

January has often been a sensitive month in inter-Korean relations. South Korea and the United States embark on their annual Key Resolve and Foal Eagle military drills around this time of year. The scope of the exercise could be reinforced given the geopolitical developments.

The U.S. could deploy its latest strategic weapons to demonstrate its deterrence ability. Next year’s security front could be defined by Pyongyang’s response.

A crisis is inevitable if Pyongyang carries out another nuclear test or fires an inter-continental ballistic missile. The tone will dramatically change if Pyongyang chooses to exercise strategic restraint and seek a breakthrough through dialogue and negotiations.

On April 5, 2009, new U.S. President Barack Obama was to make an address on a nuclear-free world in Prague. A few hours before, North Korea blasted off a rocket under the guise of a peaceful space project. Pyongyang succeeded in grabbing Washington’s attention, but the result was the so-called strategic patience with North Korea that actually represents a stalemate in North Korea-U.S. relations for the last eight years.

What strategic choice Pyongyang makes now with a new president coming to Washington should be pivotal. Incoming President Donald J. Trump is entirely different from his predecessor. Given his unconventional character, he hardly would opt to keep to the frustrating patience game. Washington would either try to talk it out or consider military action. It will be making a policy review throughout the first half of 2017. Washington could become decisively hard-line if Pyongyang attempts nuclear or missile provocations during this time.

Trump himself is a passionate and hot-tempered character. He has filled his defense and security team with hawkish military officials: James Mattis as his secretary of defense and retired general Michael Flynn as his national security adviser. Pyongyang could be inviting a very dangerous backlash if it ventures to test them with military provocations. If Pyongyang instead contains itself, the Trump administration could make an offer for dialogue first.

North Korea would be taking a fatal misstep if it attempts a military provocation or political interference to divide South Korea by capitalizing on the political unrest in the south. First of all, Seoul’s military could respond more strongly to provocations from Pyongyang during times of political deviation. This is what Washington fears most. Second, Pyongyang’s reconciliatory gesture ahead of the presidential election could deal a heavy blow to the liberal camp that would be likely to promise improvement in inter-Korean relations and peace if it takes power. It would, in fact, work in favor of the right-wing camp, which would use it as an argument against the liberal opposition taking power. Pyongyang’s interference would only end up strengthening Seoul’s hawkish position.

It would be wiser for Pyongyang’s leaders to stay put and wait until the transitions in Washington and Seoul are completed. It already showed off its nuclear capabilities in 2016. It needs not provoke Seoul or Washington further to get attention. It instead should put aside its rigidity and explore ways to resume dialogue with the U.S., South Korea and China. It would gain nothing by keeping up its resistance to six-party talks, reinforcing its military-first policy. South Korean and U.S. officials would open up if North Korea sets no limits to an agenda in talks.

The political changes in South Korea and Washington could be a boon for North Korea. It must decide whether it wants to keep up tensions and conflict or choose a path toward peace and prosperity. Such opportunities do not come often.

*The author is a professor emeritus of political science at Yonsei University.