Pizza can bring in the dough

Pizza can bring in the dough 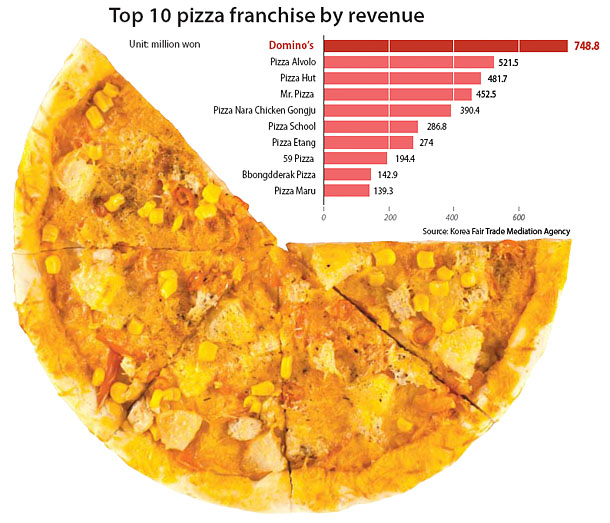 If you want to open up a pizza shop, teaming up with Pizza Hut is the most expensive option. But when it comes to turnover, Domino’s is the way to go.

These were just a few of the pizza facts provided by the Korea Fair Trade Mediation Agency Monday when it released a study of pizza franchises in Korea.

The agency under the Fair Trade Commission has been releasing studies on food-related franchises this year. Past studies have dealt with coffee shops and chicken joints.

According to the study, there are 103 pizza brands with 6,015 franchise stores across the country. Some 264 are managed directly by the headquarters.

The average cost of opening a franchised pizzeria was 156.9 million won ($130,800). Costs include rental deposits, training, equipment such as pizza ovens and interior design.

The most costly franchise to open was Pizza Hut at 466.5 million won. Mr. Pizza came in second at 269 million won. A delivery-only Pizza Hut store came in third at 237 million won, the fourth was Domino’s at 230 million won.

Foreign-brand pizzas were also at the top for royalty payments. Both Pizza Hut and Domino’s charged 6 percent of monthly revenue and Mr. Pizza took the second spot with 5 percent.

But when it came to expenses paid for advertisements and promotions, Pizza Hut franchisees have to pay 5 percent of monthly revenues compared to 4.5 percent for Domino’s and 4 percent for Mr. Pizza.

Generally, around 10 percent of the revenues of pizza franchise stores are paid to headquarters.

The agency noted that Pizza Hut stores were generally larger than other franchises. The standard Pizza Hut store is 198 square meters (2131 square feet).

Pizza Hut also offers the longest contract among leading pizza franchises. The minimum contract with Pizza Hut is 5 years while contracts with other groups have to be renewed every one to three years.

Pizza School had the largest number of branches across the country with 822.

Pizza Alvolo saw the sharpest year-on-year increase of franchises, an increase of 26.3 percent to 221.

Among the top 10 pizza brands Bbongdderak had the highest closing rate (8.7 percent).

“People with little experience in starting their own business usually pick franchises because of stability,” said an official at the Fair Trade Mediation Agency. “However, the cost in opening a franchise isn’t cheap and there are many regulations that come with sales activities. There are many cases of failure because people are overly trusting of the information provided by the franchise headquarters.