Restructuring to be continued

Restructuring to be continued 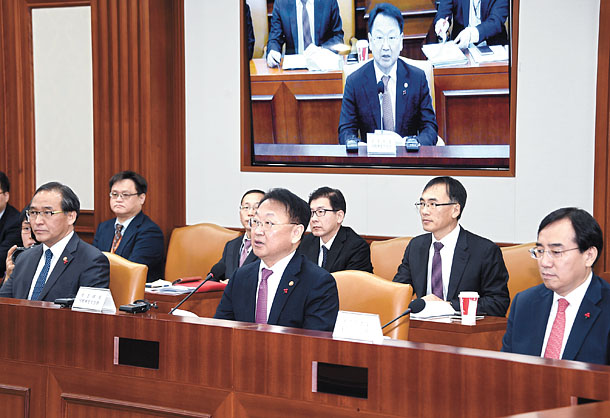 Finance Minister Yoo Il-ho, center, announces the government’s plans to help the key industries in Korea that are going through corporate restructuring at the Central Government Complex in central Seoul on Monday. The government said it will encourage many other industries go through restructuring when needed. [MINISTRY OF STRATEGY AND FINANCE]

The government said local corporations going through management restructuring plans have seen improvement and it will continue to support them next year, while encouraging other industries go through restructuring when needed.

According to the Ministry of Strategy and Finance Monday, three major shipbuilders managed to secure 4.1 trillion won ($3.4 billion) in financial liquidity through their self-rescue plans and have lowered the number of operating dockyards from 31 last year to 28 this year. They will reduce that number to 25 by next year.

The government said other industries that have been implementing such plans, such as shipping and steel industries, also have become more financially stable.

“The government and private sectors have worked hard since June and we believe this year was the year for us to come up with management turnaround plans,” said Finance Minister Yoo Il-ho at a meeting at the Central Government Complex in central Seoul on Monday. “It also has been four months since the government has been approving restructuring plans by local companies through the so-called One Shot Act, and 15 companies have now become beneficiaries of the law. We will monitor possible risks from other industries such as construction and will maintain the momentum we have built this year.”

The One Shot Act is a new law designed to speed up voluntary corporate restructuring. The beneficiaries of the law receive a range of state-led support, including tax benefits and subsidies on top of fast-track procedures for mergers and acquisitions.

The government said more companies in the manufacturing and service sectors will sign up for the program and that it will expand the financial and tax deduction benefits.

According to the Finance Ministry, the government will continue to have three major shipbuilders follow their self-rescue plans next year and will order military vessels using next year’s budget. The government already has used 800 billion won from this year’s supplementary budget to order 58 ships for public uses.

The government will give the shipping industry more support with various funds and will expand research and development investments for the steel industry that develop value-added products such as those used in cars and in the energy sector.

The Finance Ministry said it will invest 4.2 trillion won in the shipping industry next year and that it will come up with plans to boost regional economies affected by the restructuring.

“The government is trying to help employees in the shipbuilding industry get back to work and help small business owners in regions affected by the ongoing corporate restructuring so that regional economies can be revived,” said Yoo.

The Finance Ministry said it plans to invest 1.34 trillion won in shipbuilding and related sectors to improve their management. Furthermore, the government plans to give 370.8 billion won in financial support to small business owners in regions where the shipbuilding industry is key, as well as job training services to 1,301 people in those regions.