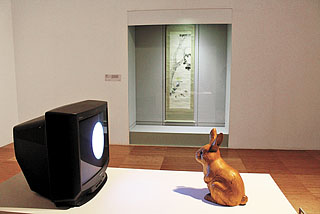 To Feb. 5: The unique exhibition explores the links between the Korean art heritage represented by Kansong Art Museum’s collection and Nam June Paik (1932-2006), dubbed the Korean-born father of the world’s video art. Paik’s video installation “Rabbit Inhabits the Moon” is presented alongside 19th-century painter Jang Seungeop’s painting “Dog Barks at the Moon under the Empress Tree.”

The 18th-century painter Sim Sa-jeong’s “Road to Shu Scroll,” an 8.2-meter-long (26.9-foot-long) ink painting that leads viewers on a journey throughout an idealized landscape, is on display together with Paik’s video installation “Elephant Cart.”

The museum is closed on Monday. Go to Dongdaemun History and Culture Park Station, line Nos. 2, 4 and 5, exits 1 and 2.

To March 1: This is the largest-ever retrospective of Yoo Youngkuk, (1916-2002), one of the leading pioneers of Korean abstract art. About 100 of his paintings on view show both cosmopolitan qualities and the artist’s personal characteristics with their unique color schemes and geometric shapes. Although they are all abstract paintings, they are “reminiscent of the deep water, rugged mountains, clear valleys, and red sun of his hometown Uljin, North Gyeongsang,” as Kim In-hye, curator of the exhibition, pointed out. 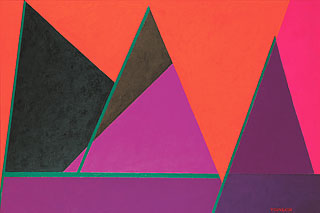 To March 5: The exhibition features 130 pieces of paintings and drawings loaned by the renowned Musee d’Orsay in Paris.

One of the highlights is the world-famous painting of “The Gleaners” by Jean-Francois Millet. The viewers can see not only the masterpiece, but also Millet’s rough drawings of it, which worked as stepping-stones to the final work. Other recognized pieces visiting Seoul include “The Siesta” by Vincent Van Gogh, which is paying its first visit to a non-European nation in decades, “Breton Peasant Women” by Paul Gauguin, and “Girls at the Piano” by Pierre Auguste Renoir.”

To Mar. 19: An exhibition that sums up the diverse art works of renowned Italian artist and designer Piero Fornasetti (1913-88) is being presented at the DDP, personally curated by the late artist’s son, Barnaba Fornasetti, who is also an artist.

About 1,300 objects, a tenth of the artist’s works that he had conceived and built over the course of his life are on display, including variations of his signature design - the face of Italian opera singer Lina Cavellieri.

Tickets cost 15,000 won for adults. The venue is closed on Monday. DDP is located at Dongdaemun History and Culture Park Station, line Nos. 2, 4 and 5. 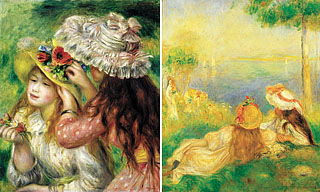 To March 26: The exhibition, one of the final events of the 2015-16 Korea-France Year, features works by the famous French Impressionist artist Pierre-Auguste Renoir (1841-1919).

A total of 47 paintings and drawings are on view and mainly depict women, the steady source of inspiration for the artist. The admission is 13,000 won for adults. The museum is closed on Mondays and Jan. 1st. Go to Seoul City Hall Station, line No. 2, exit 10 and walk for five minutes.

LE CORBUSIER. THE PATHS OF CREATION

To Mar. 26: The exhibition that’s divided in eight sections has been organized in the chronological order of the legendary modern architect Le Corbusier’s life, displaying about 500 works of paintings, sculptures, drawings, sketches and models, loaned by the Fondation Le Corbusier.

After walking through the first part of the exhibition displaying photographs of the 17 buildings on the Unesco World Heritage List, visitors can see 140 sketches and watercolor drawings on small pieces of paper, which had never been exhibited outside the foundation before.

The final section displays a 1:1 replica of Le Corbusier’s holiday home in the south of France facing the Mediterranean sea. This 172-square-foot minimal unit is equipped with a super single sized bed, where his wife Yvonne slept, a sink, a table and a toilet.